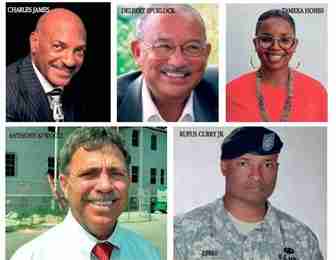 Black veterans will discuss from the First World War to today’s war on terrorism Feb. 22

PHOTOS COURTESY OF STUDY OF AFRICAN AMERICAN LIFE AND HISTORY

More than 15 African-American military veterans and scholars will convene to discuss and recognize the efforts of Black-American soldiers from the First World War to today’s war against terrorism.

Held as a panel discussion, the event will be Thursday, Feb. 22 at 11:30 a.m. at the Early Learning Coalition of Miami-Dade/Monroe, 2555 Ponce de Leon Blvd., Suite 500, in Coral Gables. The panel will be in the David Lawrence Jr. Community Meeting Room.

Panelists will share their stories about the extraordinary impact of African-American military personnel in fighting inequality at home and abroad.

This year marks the 100th anniversary of the end of the First World War (1918), and a national effort led by the Study of African American Life and History is honoring African-American military veterans and uncovering facts surrounding their efforts in times of war.

Leading the celebration here in South Florida is the Early Learning Coalition of Miami-Dade/Monroe (ELC), a non-profit that serves low-income families.

This event will be part of the ELC’s Café series, which is open to the public and brings together the business, non-profit and general community to address community-wide challenges in equity and access across South Florida. House of Hope sponsors lunch.

Next post Jeter: Marlins ‘in a good spot’ as spring training begins in Jupiter

Previous post Spirits and food a draw for Lauderhill chamber