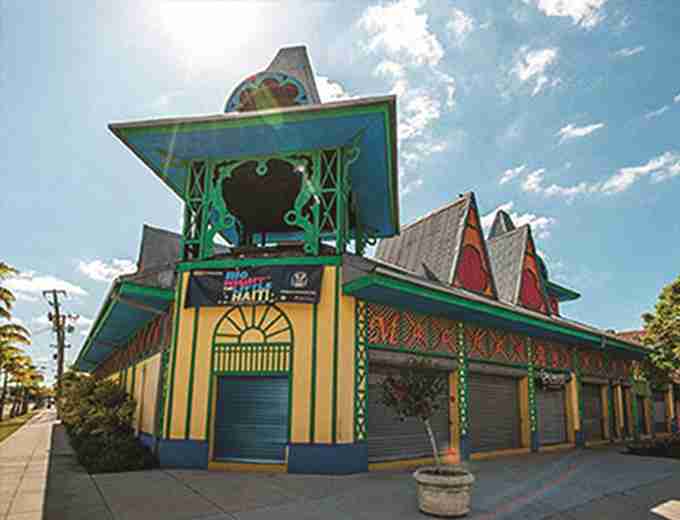 MIAMI — The Caribbean Marketplace in Miami’s Little Haiti community is about to have its long-awaited reunion with an old flame – the South Florida community. The city will host a reopening ceremony of the renovated facility on Friday with a ribbon-cutting ceremony.

The event will celebrate the rebirth of a project that has involved the Miami-Dade Department of Cultural Affairs, the Little Haiti Cultural Complex, the Northeast Second Avenue Partnership (NE2P) and freshman City Commissioner Keon Hardemon. The reopening will be followed by the July edition of the free concert series Big Night in Little Haiti.

The 9,500-square-foot facility will offer space for vendors specializing in but not limited to arts and crafts. A refreshment and concession area will have a distinctly inviting West Indian feel.

Marketing, financing and technical support will be available for new businesses. Low rates, technical and marketing assistance will be provided to all vendors, including a media plan geared toward local and tourist markets.

For the thousands of motorists who have driven up and down Northeast Second Avenue in the Little Haiti/Little River area over the past several years, the Caribbean Marketplace is impossible to miss. It is a whimsical sentinel of pastel colors whose peaked corrugated metal gables converge upon a cross between a park gazebo and Victorian church steeple. With so many people moving to Miami over the past several years, some may not remember that the market was first opened some 30 years ago.

The facility was the brainchild of the privately run Haitian Task Force which was headed by Robert Lamothe. With a huge surge in immigration to Miami from Haiti during the late 1970s and early 1980s, the group envisioned a ti-machin, or flea market, ambience.  This tropical bazaar began to get underway in the mid-1980s, says Carl Craig, a local financial consultant, who was on the board of the task force.

A contest for the architectural design was won by Rufus Simms and Charles Harrison Pawley. Ironically, Lamothe found out, Pawley, who died eight years ago this month at age 73, was born in Haiti to American parents toward the end of the 19 -year U.S. occupation of that country.

The distinctive style of the building, which pays homage to Port au Prince’s charming gingerbread houses, won an American Institute of Architects national award and was profiled in Architectural Review magazine in November 1990.

At the grand opening in 1990, 23 merchants were in place for business, ranging from record stores to food vendors and a book store. For Craig and Lamothe, it had an economic ripple effect.

“It created economic development around it,” said Craig.

Lamothe said in the early 1980s he counted 37 Haitian businesses in Little Haiti, an area he defines as bordered by Northwest 36th Street in the south to Little River in the north and Federal

Highway to the east to Northwest Seventh Avenue to the west.  “Now there are several thousand,” he said.

But the boom times did not come soon enough for the Caribbean Marketplace and financial problems overwhelmed the project. Explanations for the eventual collapse differ but the end results were painfully apparent. Utility bills were unpaid and services were cut. Six years after its opening, the city shut it down.

Although the venue was open for smaller events over the years, the lack of use led to further deterioration of a facility that started out with inadequate air-conditioning.

Originally envisioned as a one-stop showcase for sustainable Caribbean art that was to be marketed especially toward tourists, the original Caribbean Marketplace was to be the focal point for the community.  Some political leaders such as then Miami-Dade Commissioner Barbara Carey-Shuler, former Miami City Commissioner Michelle Spence-Jones and the late Miami City Commissioner Arthur Teele also envisioned the site having a major impact on the emerging Haitian enclave.

While the Caribbean Marketplace languished in an uncertain future, the city of Miami moved forward to erect an adjoining Little Haiti Cultural Center with the “mission … is to provide a space that brings together people and ideas to promote, showcase and support Afro-Caribbean culture in South Florida.”

“In spite of all the bad things there would not be a Little Haiti Cultural Center without the Caribbean Marketplace,” Craig said.

He and Lamothe and many others in the community are optimistic about a sustainable renaissance for the Caribbean Marketplace.

“I hope that the Haitian artisans’ linkages are upheld,” said Lamothe, who plans to attend the reopening.