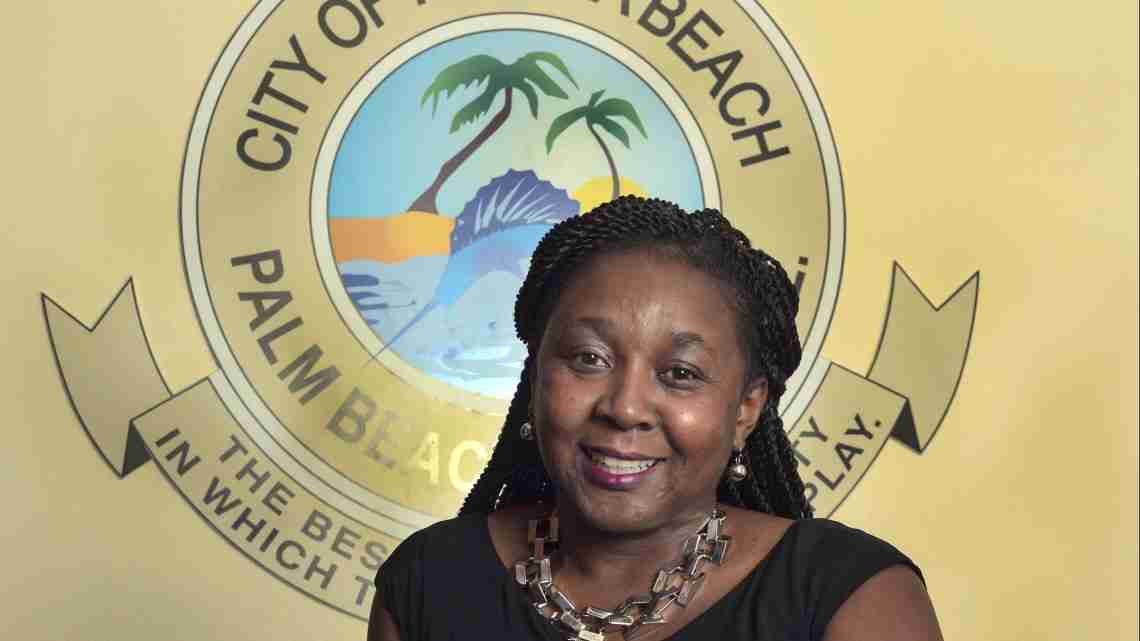 ELECTION RESULTS: Dr. Julie Botel (featured on p. 2A) a former Deputy Schools Superintendent is Pennsylvania and city council chairwoman KaShamba Miller Anderson (above) both received an affirmative nod by voters and were elected to Council seats by a landslide.

It appears the ghost of Jonathan Evans, former city manager of Riviera Beach, is haunting city elections. No, Evans is not really a ghost. In fact he is very much alive, now working as city manager in Madeira Beach, Florida.

In last week’s municipal elections, two Riviera Beach candidates won by huge margins, and it’s said to be due to the fall out over the ouster of Evans, which came suddenly last fall–leaving hordes of city residents angry.

Julie Botel, a former deputy schools superintendent in Pennsylvania, beat out 10-year incumbent Dawn Pardo in an 80-20 landslide – a feat said to be the loud voice of the people “unseating” Pardo because she voted to fire Evans. Meanwhile, KaShamba Miller Anderson, council chairwoman, who supported Evans, also won by a large margin.

Riviera Beach Mayor Thomas Masters, who sided with newcomer Botel, and incumbent Miller Anderson, said Evans was figuratively still on the ballot. Voting in the city was up 25 percent in this election because city residents were angered over the Evans ouster, he said.

“I do feel the people spoke loud and clear Tuesday. Most were voting for Evans’ supporters. It was no question in my mind that Evans was on the ballot,” Masters said. “The people want their city manager back and we need to give the people what they want.”

The firing of Evans caused widespread chaos in the city last fall because at that time, the residents felt there was no solid reasoning given for his termination. (Two of the three councilpersons who voted to fire Evans, have since explained their decision to the South Florida Times in a story published last month) But at the time of Evans’ removal, residents swarmed council chambers demanding answers, starting a recall effort, and vowing to get rid of the three who got rid of Evans. Many of the people believed Evans was good for the city. The three council members who voted to fire Evans were, Terence TD Davis, who made the motion to fire Evans; Lynne Hubbard and Dawn Pardo.

Efforts to reach Pardo were unsuccessful.

Botel, the big winner and a newcomer to city politics, said Evans’ dismissal caused her to throw her hat in the ring.

Botel represents District 4, Singer Island, the more affluent section of the city, but according to her bio, she has worked consistently with the downtrodden throughout her longstanding educational career, having worked in predominantly black school districts in Pennsylvania. Botel says she has a heart for helping those in need and believes it resonated with the people; coupled with her opposing Pardo. “I’m excited and anxious to get to work,” she said in a post-election interview last week. As for the new city manager, she says she believes the person should have government experience to do the job. An interim city manager is now holding the position.

Botel says she also wants the city to have a better reputation when it comes to business. “We need to be more pro-business. Our city has a reputation of being anti-business and we need to change that,” she added.

Meanwhile Miller Anderson, an Evans supporter who voted against his firing, won by a 63 percent margin.

“I am elated to have the opportunity to continue fighting for our residents. The last few days prior to the election, as a last ditch, desperate attempt to win, a flyer was circulated throughout the community filled with untruths. I’m glad the residents saw through this tactic to slander my name and remembered my voting record and their experiences with me and voted for the best person for the job.”

Miller Anderson’s opponent, Keith Golden, said he, too, believes the race was really about Evans. “Absolutely, the voters were making a statement about their displeasure about Evans.” Although he said Evans was treated unfairly, Golden said he would have fared differently without the issue affecting the race. “I believed he was someone who could’ve moved the city forward. But he wasn’t afforded due process.

Everybody deserves due process,” he indicated.

Golden, who made history in the Town of Palm Beach as the first black chief in fire rescue, says his goal has always been to move Riviera Beach forward. “I see Riviera Beach as a diamond, and I want everyone else to see it through the same prism.”