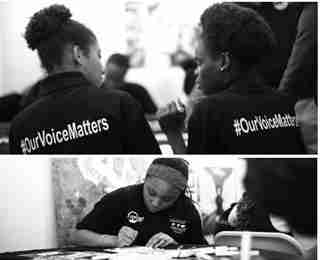 MIAMI – Last weekend Soul Basel lit up the streets of Historic Overtown and in the midst of all that shine was the artistry of students from Urgent, Inc.’s Rites of Passage, FACE (Film, Arts, Coding & Entrepreneurship) and After School Programs.

The exhibit “Our Voice Matters” showcased youth photography, crafts and films at the historic Ward Rooming House. The gallery will remain open to the public through Feb. 2018.

Made possible by the generous help of sponsors, the exhibit afforded youth artists ages 5-18 with the opportunity to have their work on display.

The relatively quiet room became quite lively around the subject of local artists making an impact on the industry through streaming.

“I have been working with the young people from Urgent, Inc.’s Rites of Passage program for a little over a year now, and I realize working with the youth has become my passion,” Tracey said. “I am just as enlightened and informed by them as I hope they are by me.”

Youth also served as guides through the exhibit showcasing their intimate knowledge of the art and artists. One of the favorites proved to be a photograph featuring 17-year-old Emely Batista impersonating wall art in Wynwood. She directed the piece herself, but gives credit to her friends for the inspiration.

“This artwork caught my eye right away. Everyone said I looked like her, so I decided to have someone take our picture. I’m proud of it,” Batista said.

The exhibit also featured a PIC photo booth that allowed the teens and other attendees to receive a commemorative fun photo to remember the event.

Code Fever Miami opened the day with a PowerPoint presentation designed to spark interest in the coding field. Teens were introduced to cell phone-powered virtual glasses through which they could fly one second and roam through a museum with dinosaurs the next.

“I liked the virtual googles,” said 12-year old Quanisha Bell. “I was flying with the birds and then I went to Antartica.”

Teens were also allowed to pitch their best coding ideas for a prize. Immediately after, Urgent, Inc. in partnership with Florida Film House, presented the work of young filmmakers who told stories through short films and Public Service Announcements.

Urgent, Inc. alum Elijah Wells showcased his short film as well as a video he directed with rapper/actor Romeo Miller. He took a few moments to talk about his journey as an up and coming filmmaker.

“If you keep working at your dreams and put them in the universe, you’ll succeed,” Wells said.

Despite the rain, Community Day held Saturday, Dec. 9, was a huge success. Artist Alex Douyon guided the youth in creating pieces to a wall mural by utilizing small canvas panels and paint markers.

Sixteen-year-old Vela Molin said Community Day was his favorite part of the three days, “I enjoyed it because it was relaxing. It made me think. I had to think about my design,” Molin said.

Path to Hip Hop also played a variety of tunes to set the mood during the day, including a new release entitled “Loveless Generation” from Urgent, Inc.’s very own Rites of Passage students. The song is the first release from the “Our Voice Matters”

Stephanie Durusea, 13, summed up her experience as a “time to do things I enjoy doing with my friends.”

“I’m shy and sometimes it’s difficult for me to make friends and come out of my shell,”

Durusea said. “Rites of Passage gives me the chance to have fun times and make friends at events like this.”

Since its inception, Art Africa Miami and Soul Basel have presented annual opportunities that give youth a platform to expose their talent to a large and expanded audience. Urgent, Inc.’s goal is to continue presenting youth with these and other opportunities for success.

“It’s not enough to just have them do the work. We want them to experience what it feels like to see their artwork hanging on a Gallery wall in a major art fair. We want them to hear the applause after a film they worked on pleased an audience of moviegoers,” said Saliha Nelson, vice president of Urgent, Inc. “Many of our young people from our program have gone on to chart a successful path for themselves in film schools like Elijah, in college like Monica and even the workforce. We’re so proud of that.”