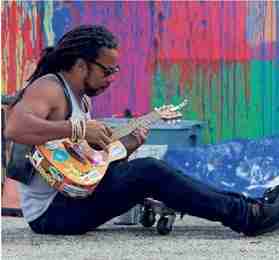 HALLANDALE BEACH, Fla. – Keya Tama, a 19-year-old artist from South Africa, joined Broward County resident artist Ruben Ubiera to complete two walls surrounding a new school that will open next year for infants and parents to train together learning English as a second language on one campus. Parents will also receive jobs.

The Early Language Learning Academy (ELLA) is a joint project between the Broward County School Board and a variety of partners including PNC Bank. It’s a ‘grow up great’ initiative.

What began as a mural project to recreate the school’s popular logo of a dolphin became a mural that spoke to an evolution of the property’s use from a middle school to a prototype for language learning and a family enrichment center.

In the design, Ubiera illustrated a butterfly as ‘the intersection’ of the two 40′ walls where a crawling caterpillar is then transformed with enthusiastic learning and a school of frolicking dolphins spinning around the building blocks of learning.

Keya’s figures look onto the metamorphosis with distinctive symbols painted all over them and the skies above featuring a mix of Haitian, South African and ancient civilization patterns and markings from his many travels around the world with his famous mother Faith47, also an acclaimed muralist.

The colors of both sides of the mural are bright pink and blue, reflective of the Hallandale Beach colors and ocean themes. Two larger than life inquisitive foxes visit the school (foxes actually do congregate at night on the campus) and surround the father, a ‘playful cowboy’ of sorts.

“Neighbors of this quiet, older, middle class neighborhood came out during the day and night to talk to the two artists fascinated by the figures and activities and how the mural transformed two forgettable, white walls into a lively story about the power of learning and the hope that our nation represents to so many coming in search of opportunity in America,” said Clare Vickery of Grace Arts FL.

Grace Arts is PNC Bank’s non-profit partner on the project.