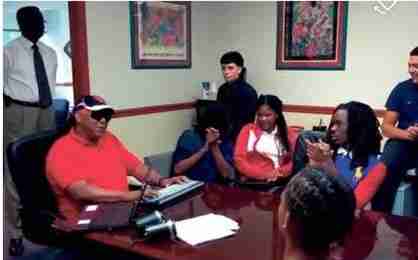 When Elder Mathes Guice, founder and president of Community Reconstruction Housing (CRH), visited the Cypress Run Education Center in Pompano Beach, he was heartbroken. “It’s a tragic situation,” he said, exasperated. “It’s as if they’ve been left out and left behind,” he said of the children who attend the alternative school for those who have been booted out of their regular school for various disciplinary problems. The school serves middle and high school students. some whom ended up at Cypress Run due to a “one-time”offense at their home school, and others were sent there due to repeated “run-ins” in terms of disciplinary issues at their original school. Their final result may have been expulsion and thus they were sent to Cypress Run for 90-180 days.

But Guice, former law enforcement officer, a member of the Circuit 17 Juvenile Justice Board, and a church elder, said when he saw the plight of the kids at the school, he said it was clear, the system deemed them hopeless. It was obvious to him, these kids needed more than simply being “warehoused” at a prison- like facility. With various individual and family problems, he said, they were lost in the system with nowhere to go and with no positive outcome in sight.

“When we looked at the boys and girls there, there was no hope for a future. There was no job skills, no therapy, no skills training…..They were on a pathway straight to prison. That was going to be their outcome. I had to do SOMETHING to change that!” Guice, so moved to make a difference for the kids, even wrote a letter to Governor Rick Scott asking for funding for a program to help them. He knew the Community Reconstruction Housing program could help these students. Surprisingly, the Governor responded and in kind, Guice received funding for a pilot program, which he implemented over the summer.

Sara Brown, Vice-President of Development and Operations for CRH, said with the grant from the Department of Juvenile Justice, CRH was able to introduce vocational training and more at the school. “We introduced vocational training, money management, role-playing and mock interviews, self worth, and field trips to various businesses.”

Brown said one of the students even became employed at McDonalds as a result of the program.

“It made a huge difference,” said Dr. Gastrid Harrigan, principal of the school. “We needed vocational skills training in order to prepare our students for the job market. Some of them will not be college-ready, so they need vocational skills.

“Elder Guice and Sara Brown have already been successful with us because they’ve gotten students hired.We need more resources extended to them, so that we can serve even more students,” said Harrigan.

The School Board of Broward County has agreed to work with Guice’s program to better the outcomes for the students at the school. It is not exactly clear how the school district will do so.

School Board member Robin Bartleman did return our phone call, but as of press time, we had not connected for comment.

The Children’s Services Council (CSC) of Broward County is also exploring how best to make a difference at the school, at Guice’s urging. “We’re having ongoing conversations and planning with the principal to see how best to help. The challenge with this school is that the children only go to the school for short periods and then are sent back to their home school. We want to be able to help them at their home school,” said Cindy Arenberg-Seltzer, President/CEO of the CSC. Seltzer said multiple programs are already made available to the school.

The Children’s Services Council’s mission is to provide leadership, advocacy and resources necessary to enhance the lives of the children of Broward County and empower them to become responsible, productive adults.

And that’s exactly what Guice and Harrigan are looking to do. The two will be restarting a program soon as a continuation of the program that was implemented during the summer.It will fall under the umbrella of the Community Reconstruction Housing’s “Rites of Passage” program, and will focus on a more comprehensive approach to serving the needs of the students.”They all need life skills, therapy and family counseling. The CRH can offer that. All of our case managers are family therapists,” Guice pointed out.

Brown said she is excited about the prospect of continuing where they left off during the summer. “We will continue with vocation, and introduce them to our Rites of Passage program, in which we’ll have case management and develop a life and family plan for both short-term and long- term students attending Cypress Run. We can help them because no child is a bad child, they merely make bad choices,” said Brown.

Guice said he will do whatever necessary to bring hope to these children’s lives. “Every child deserves a chance in life,” he said passionately. “There was no way I could leave these kids in a hopeless situation.”

His goal is to put every child on a career path instead of leaving them with no employable skills. “But we need to work on them internally, and work with the family. We have a program that does that,” he said.

But Guice pointed out that Cypress Run is not the only alternative school which needs help. “It’s all of the alternative schools. Their path right now is straight to prison and that’s mind boggling to me,” he said.

Guice said it’s going to take a collaboration of resources to make a positive difference in the lives of the students at Cypress Run. That’s why he’s called on the school district, as well as other community agencies like the Children’s Services Council.

He still needs funding to carry out the programs on an ongoing basis. “I will also be calling on city officials to help as well.”

But Guice said he’s not waiting around. “The process is starting now, until we get the funding necessary. Time is running out for these kids. We have to do something now to help them. You don’t just send the children out into the unemployment lines with no hope. That’s crazy!” “This will be addressed,” he stressed.

For more information on the Community Reconstruction Housing or to assist, please visit the website at www.crh954.com or call 954-906-5524.