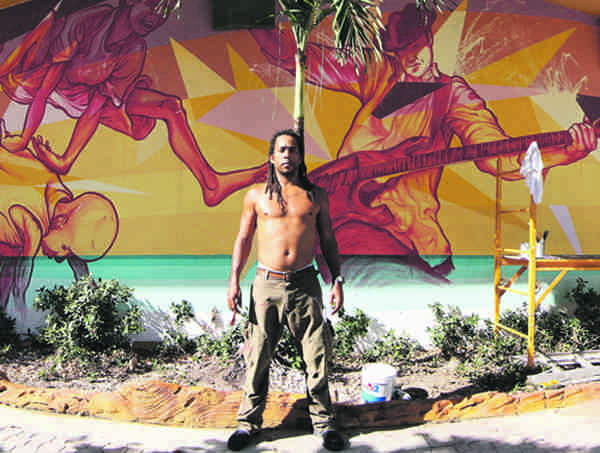 HOLLYWOOD — Street art is popping up everywhere in downtown Hollywood and it’s there because of the Hollywood Community Redevelopment Agency.

The latest installment in the Downtown Hollywood Mural Project is by artist Daniel “Krave” Fila, at 203 S. 21st Ave.

The program is simple and low-budget, but the impact has been huge, said Jill C. Weisberg, the project curator at the CRA. The mural project was to revitalize downtown Hollywood and give people a reason to come to the area. Weisberg says she sees the evidence. A new art gallery has opened and lots of selfies are shot at mural locations throughout the area. 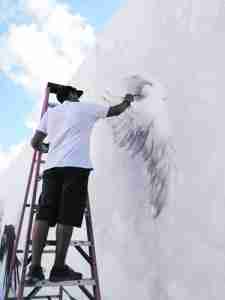 PHOTO COURTESY OF jill weisberg
Posers and Dream Crushers: Artist Evoca1 works on his mural, which is located at 2020 Hollywood Blvd.

While Wynwood in Miami organically had warehouses with huge walls on which artists could paint, downtown Hollywood has a different infrastructure. So the CRA asked businesses if they would allow murals to be painted on the exterior of their buildings. Since august 2012, 12 murals have been installed, and there is no end date.

Ruben Gerardo Ubiera Gonzalez’s installation on the side of Downtown Ramada at 1925 Harrison St., spans 12-70 feet and reflects his idea of Hollywood. Artist Evoca1 painted Posers and Dream Crushers at 2020 Hollywood Blvd., to tell viewers “not to be misled by false appearances and behaviors.”

To be part of the process is, again, simple.

Artists apply to install a mural; paint and supplies are donated; a building and an artist are selected; and then the artist starts to paint. Muralists can take anywhere from three days to weeks to complete their installation.

The CRA said street art is a way to give people the opportunity to relate to art, especially those who may not typically go into a museum or gallery.

“We wanted to enhance the neighborhood with energy and surprise,” Weisberg said.

The murals are an added value for the monthly Hollywood ArtWalk, held every third Saturday of the month.

“People get to meet the artists and watch them paint live,” Weisberg said.