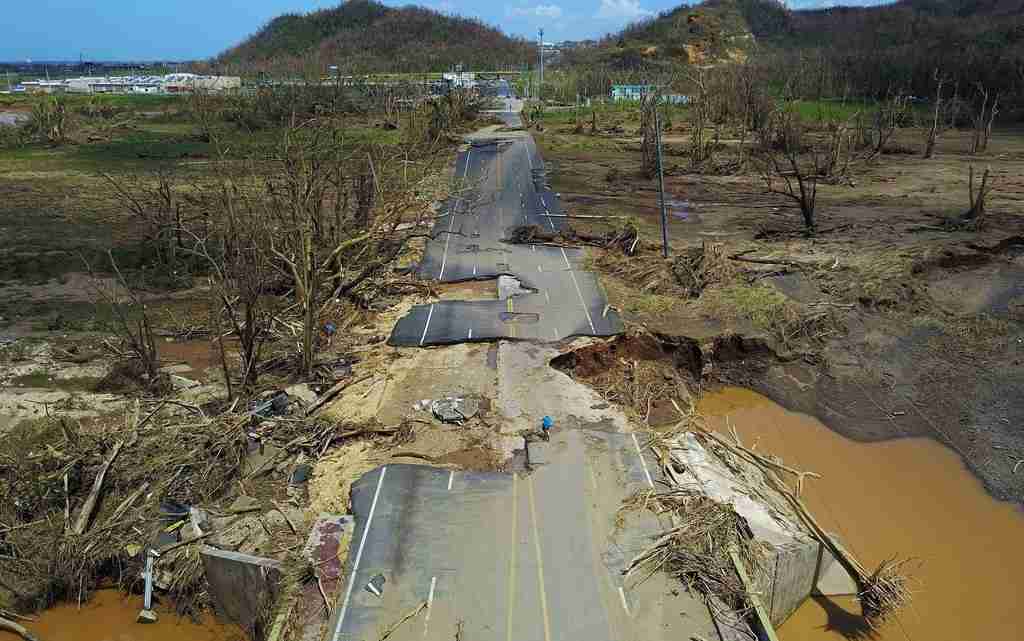 COROZAL, Puerto Rico Hurricane Maria shredded the electric poles in this plantain farming town high in the mountains of central Puerto Rico, leaving tens of thousands of people without power or running water.

Desperate, residents of the town’s Barrio Mana neighborhood asked federal officials for a generator to pump water from the well that supplies the neighborhood’s 130 families.

That was nearly six months ago. Today, like everyone in Barrio Mana, World War II veteran Antonio Morales, 93, sleeps in a single-story concrete home with no running water, its floor covered with dozens of gallon jugs and plastic buckets of water that his nurse uses to bathe him.

“Barrio Mana is not even on the government’s radar,” said Morales’ 61-year-old daughter-in-law, Maria Perez, her eyes filled with tears. “Practically no one has shown up here.”

Super-charged with energy from unusually warm seas, Hurricane Maria caused roughly $100 billion in damage to Puerto Rico when it roared across the island Sept. 20, according to the government of the U.S.

U.S. lawmakers have appropriated $23 billion in direct aid, a response that some Puerto Rican officials called woefully inadequate. Separately, the Federal Emergency Management Agency has spent some $6 billion for Puerto Rico from its standing emergency funds since the hurricane.

As the six-month anniversary of the Category 4 storm approaches, only a fraction of the $23 billion in congressionally approved funds has actually been spent in Puerto Rico. In February, a $4.7 billion loan approved last year for Texas, Florida, the U.S. Virgin Islands and Puerto Rico was reduced by the U.S. Treasury Department to $2 billion for Puerto Rico, none of which has been disbursed. And programs funded with FEMA money, like generators for rural wells, have yet to reach thousands of Puerto Ricans like those in Barrio Mana, American citizens living in Third World conditions six months after a natural disaster.

Meanwhile, tens of thousands of Puerto Ricans are still waiting for permanent shelter, water or power as the next Atlantic hurricane season approaches.

“If we were a state, the response certainly would have been a lot quicker,” said Omar Marrero, director of Puerto Rico’s Central Recovery and Reconstruction Office. He said that of the $23 billion, Puerto Rico has so far received only $1.27 billion for its federal assistance nutrition program and $430 million to help repair public infrastructure.

“At a time when people on the island are hurting, it is unconscionable to not provide maximum relief to American citizens at the hour of their greatest need,”

they wrote. “Unfortunately, the Treasury Department seems more concerned with repayment of the loan than in providing emergency liquidity relief to an island battered by two hurricanes and 11 years of recession.”

Puerto Rico remains mired in a longstanding economic crisis, struggling to restructure a portion of $73 billion in public debt accumulated through years of mismanagement, corruption and the elimination of decades-old federal tax breaks. The response to Maria has unleashed fresh allegations of corruption and mismanagement of federal aid.

Mnuchin testified to a U.S. House of Representatives subcommittee that Puerto Rico’s government was delaying the process by making unreasonable demands, which he declined to specify.

“I can assure you we have a team at Treasury that stands ready to lend them money right away,” he said. “We are not holding this up.”

FEMA has granted more than $1 billion in rent payments, home repairs and other expenses, spokesman Daniel Llargues said. The U.S. Army Corps of Engineers has installed more than 59,000 tarps for the roughly 60,000 homes approved for the project, according to public affairs director Jacqueline Tate.

But billions of dollars remain pending, including $1.5 billion in congressionally appropriated money that was promised last month in community development block grants for Puerto Rico’s Department of Housing.

In Barrio Mana, neighbors cleared a small piece of land five months ago after meeting with federal officials who pledged to provide a generator to pump water from the neighborhood’s well.

“After that, we never saw them again,” said Enemias Rivera, the well’s administrator.

The U.S. Environmental Protection Agency said it is awaiting permission from FEMA to install the generator, but FEMA said it has not received a request from the administration of Gov. Ricardo Rossello. Meanwhile, Corozal town officials did not return calls for comment.

Jenniffer Gonzalez, Puerto Rico’s representative in Congress, and a spokeswoman for Rossello did not return requests for comment.

FEMA said in a statement that it continues to work with Puerto Rico’s government and other agencies and groups, and noted that the response to the hurricane in Puerto Rico was the largest disaster air delivery mission in U.S. history.

“After two catastrophic hurricanes struck the island six months ago, we realize that there will still be unmet needs, as federal assistance isn’t meant to make people whole, but help survivors start their recovery,” the agency said.

Six months after Hurricane Maria, 97 percent of water customers do have service and 91 percent of power customers have electricity. But for those rural areas that remain in the dark, power company officials are considering installing FEMA-funded battery-powered solar panels to provide more immediate relief, Electric Power Authority interim director Justo Gonzalez said. At the same time the company is struggling with nearly weekly outages. The most recent one, on Monday, affected some 50,000 customers. Two weeks ago, some 970,000 people were left in the dark.

The Power Authority also is facing allegations of corruption and mismanagement. On Monday, the U.S. House Committee on Natural Resources demanded documents related to any investigations into the allegations, including that crews accepted bribes to restore power first to strip clubs and that some restored power to their own homes ahead of the island’s largest public hospital and main international airport. The company has said it has not received any complaints or information regarding those allegations, but said it would investigate if anyone came forward with information.

Perez and her neighbors say they have given up hope they will ever get a generator for their well.

“They’ve abandoned all of us,” said Jose Antonio Rosado, whose wife needs dialysis three times a week and depends on an electricity inverter that a nonprofit organization donated to the couple as they continue to wait for power and water connections. “The help never, never, never materialized.”