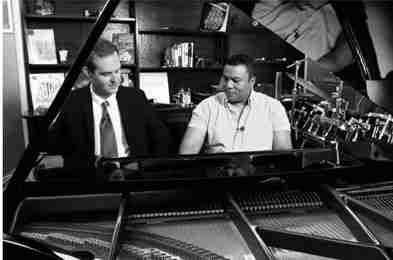 WASHINGTON – At Catholic University on a warm September evening, a student plays piano at a fundraising dinner to celebrate the school’s new arts council. As musical preludes waft through the candlelit room of donors and university officials, Warren Shadd sits with his back to the performance and listens intently to the piano, which bears his name. After the final note, he applauds and smiles softly. He wasn’t expecting any problems. But he has been making and selling pianos only since 2012, and everything matters to him – from the shop floor in the Bronx, where he “white-gloves” each instrument, to performances like this one.

Shadd decked out that evening in a black suit and gold silk tie – is keenly aware that century-spanning companies, such as Steinway & Sons or Bösendorfer or Yamaha, have a head start. “We’re brand new,” he says. “We can’t let anything seep through the cracks.”

If product placement is any measure, then something’s going right. Shadd, who, as far as anyone knows, is the nation’s only African American piano maker, has his high-end, made-to-order instruments in several Rolls-Royce dealerships, on the set of the television show “Empire” and at the Vatican. It helps that he is an accomplished musician with a salesman’s drive and a showman’s charm. When he first heard the Holy See was looking for a piano, he wrote Vatican officials a letter. To his amazement, they wrote back. In 2015, three donors gifted an instrument to the Vatican, and Shadd personally delivered a gleaming black grand piano emblazoned with the papal seal.

At the performance in September, Monsignor Massimo Palombella, head of the Sistine Chapel Choir, tells me that he uses the piano for daily rehearsals and that the Vatican has another one on the way for “official moments,” which Shadd plans to deliver in December. He and Palombella chat for a bit. “You see that,”

Shadd says later, with a bit of awe in his voice. “You can’t fake that kind of warmth.”

Shadd grew up in Northeast Washington in a musical household. His parents, Evelyn and James, were federal workers, but James was also a jazz pianist and had a piano-tuning business. “My father – I call him ‘early email,’” Shadd explains. “He worked at the Civil Service Commission. He used to push this big mail cart. That was his gig all day, delivering mail, notes and documents. He would do that, come home, eat dinner, then go to the gig. He and his band would play until 2 a.m.”

Their home was packed all the time with singers such as Roberta Flack and Shirley Horn (Shadd’s aunt), and prominent jazz musicians Frank Wess and Billy Taylor. “Our house was somewhere the cats would come after the gig and they would just hang and play, sometimes all night,” he recalls.

By the time Shadd was 8, local newspapers were chronicling his skills as a drummer. (He has framed clippings hanging on the walls of his District Heights home.) As a teenager he spent two summers playing drums at the Players Club on K Street NW, where, at the end of a workday, men piled in for a burlesque show. Shadd remembers playing and watching from the stage as men drank and drank some more, sometimes disappearing into tobacco hazes. (No one, he says, questioned his age.)

He started piano lessons at age 5 but did not focus on the instrument more seriously until he was about 12. “That’s when I started thinking that I could write music, and you needed a piano for that,”

he says. He left Howard University his junior year to play jazz organ with Lionel Hampton, then drums with other jazz greats, Sarah Vaughan, Ella Fitzgerald and Horn among them.

When his dad died in 1993, Shadd took over the piano-tuning business. He had tinkered with ideas for pianos, but it took an encounter with an older customer named Mr. Tucker to convince him that he needed to do more. He was tuning the old man’s piano when Tucker, his voice cracking, pointed at the instrument and said, “That should say Shadd because you’re the only one.” Shadd took that as a cosmic sign that he should build pianos.

“Starting a piano company is not for the faint of heart,” he says. For the first 10 years, he struggled for funding, and he got help with his first patent only after several lawyers passed on it. (One finally agreed to help if Shadd tuned his daughter’s piano. He did.) He had several false starts with promises of help from larger companies that didn’t pan out. Finally, the Setai hotel in New York, now the luxury Langham Place, decided to renovate and wanted a new piano. Shadd pitched his, and the hotel paid to have one built at cost.

Today, Shadd upright pianos start at $22,000, its concert grands at $185,000. Custom pianos can go for more than $300,000. He has chosen to focus, with patented designs, on improving the way pianists hear what they play. “Normally, the sounds of a piano emanate around the sound board and the back of the piano,” he explains. “It doesn’t travel toward the pianist; it goes up and out the curve.” He is tight-lipped, however, about how his design makes the sound also travel toward the pianist.

Shadd talks more readily about how he incorporates electronics. Some of his pianos have a musical instrument digital interface, or MIDI, that allows musicians to include anything from bird noises to trap music. He has also developed a “hybrid interactive piano” that people can scan music into and use to communicate with other musicians. It has been helpful to disabled musicians, to people who are blind or deaf, and to those with autism.

Tom Grace, who has worked for Jordan Kitt’s Music for 30 years and is the sales manager for its Rockville store, appreciates what Shadd has accomplished and the hurdles he still faces. “Pianists arrive (at a venue) and play whichever instrument is available. And through the years, Steinway has (dominated) on classical music performance. So the Kennedy Center, Strathmore and Wolf Trap are equipped with Steinways, but there are many pianos on the market that are just as well-made but have tonal differences,” he explains. “For Warren to break into that (type of) concert venue, that would be a challenging task.”

Shadd works out of his home and keeps costs down by marketing on the Internet and social media. His small staff includes Angela Mascia, who oversees logistics and international dealings, and several craftsmen who build the pianos in the Bronx.

Shadd still recruits customers himself. Two years ago, he cold-called Caroline Perzan, a veteran set decorator who developed the look for “Empire,” to convince her that his pianos fit the style of the series, about a music mogul. Perzan needed a piece for the ornate office of protagonist Lucious Lyon, played by Terrence Howard. “Empire” “was going for an ambitious high-end look, so the pianos were one of my main challenges,” Perzan said. “I just sent my wish list to him.”

The show now has six Shadd pianos. For the first time next year, he plans to put his pianos in stores – at least 10 nationwide and a few in Italy and Germany. But he won’t disclose sales or rental figures or the number of pianos sold. The master pitchman, flashing a soft smile, offers only this: “We do well.”