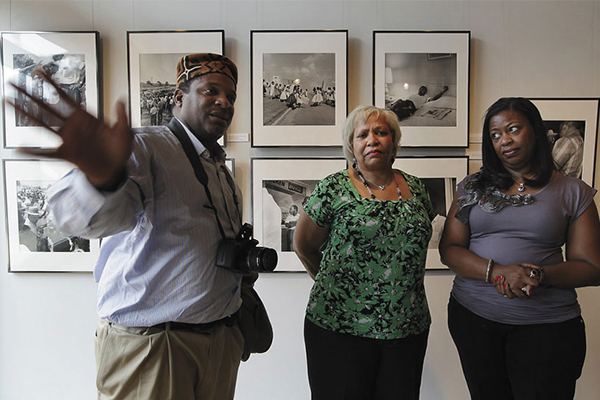 MEMPHIS, Tenn. – Civil rights movement veterans are struggling to explain the motives of a revered photographer recently unmasked as an FBI informant who spied on the Rev. Martin Luther King Jr. and others even as he captured their most intimate moments. His children don’t believe it’s true.

This was to have been the season to honor the late Ernest C. Withers for his historic work, with his photos displayed at a museum bearing his name.

All that has been overshadowed by The Commercial Appeal newspaper revealing he was an informant who regularly tipped authorities about civil rights leaders, many of whom trusted him so completely that he was allowed to sit in on their most sensitive meetings.

“Personally, and as a family, we do not believe what has been alleged. It still has to be proven,” Withers’ youngest daughter, Rosalind Withers, told The Associated Press in an interview at the unfinished museum on Memphis’ Beale Street, set to open later this year.

The newspaper reviewed thousands of pages of federal documents obtained under the Freedom of Information Act, providing a glimpse into the FBI’s surveillance of civil rights leaders. D’Army Bailey, a former Memphis judge and activist, said colleagues knew the FBI was watching.

“It’s a very serious and disturbing thing, it’s not a surprising thing,” Bailey said, adding that he suspects Withers wasn’t the only one passing information on to the FBI. “If you take it all the way back to slavery, there was never a successful slave revolt because the house Negroes would go and tell the boss man what the field Negroes were planning,” Bailey said. “And this is all part of the same pattern. It teaches us a lesson that the more things change, the more they stay the same.” Ernest Withers, often called “the original civil rights photographer,” died in 2007 at age 85.

His crisp black-and-white pictures chronicled the seminal Emmett Till murder trial in 1955, racial integration at the University of Mississippi in 1962 and the 1968 sanitation workers’ strike in Memphis that brought King to the city where he was assassinated. Withers marched with King, and was beaten by police while covering Medgar Evers’ 1963 funeral.

Relatives tell how white bystanders would hurl insults or spit at him as he covered civil rights marches. But the FBI documents obtained by The Commercial Appeal present a story of spying and secrecy. The newspaper did not have access to Withers’ informant file because it is sealed.

The Justice Department twice denied The Commercial Appeal’s requests for that file and won’t acknowledge it exists, the newspaper reported. Instead, the government released 369 pages related to a 1970s public corruption probe that targeted Withers, who pleaded guilty in 1979 to extorting kickbacks from a nightclub owner while he was a Tennessee Alcoholic Beverage Commission agent.

Those pages included redacted references to informants, but in one instance the FBI failed to hide a single reference to Withers’ informant number, ME 338-R. The newspaper then studied more than 7,000 pages of other FBI reports released 30 years ago under FOIA for references to the number. Those reports pinpoint specific actions by Withers and show he was one of several informants. Withers proved “most conversant with all key activities in the Negro community,” according to an FBI report cited by the newspaper.

It’s not clear if Withers was paid for his information. However, retired Marquette University professor Athan Theoharis, an expert who reviewed the newspaper’s findings, said Withers fits the profile of a paid informant who was closely supervised by area agents.

“It would be shocking to me that he wasn’t paid,” Theoharis told the newspaper. During the sanitation workers’ strike, Withers met with two FBI agents in Memphis, the newspaper found. A report indicates informant ME 338-R , Withers, supplied them a newsletter listing names and photographs of community leaders who likely organized the strike.

The day before King’s April 4, 1968, assassination, the informant passed on details about a high-level strategy session at the Lorraine Hotel between King and young militants who had a role in the strike. Withers also revealed details from King’s funeral in Atlanta, reporting that two Southern Christian Leadership Conference workers planned to return to Memphis “to resume … support of sanitation strike,” the newspaper reported.

In response to those nuggets and others in the story, some activists of the era acknowledged they were approached by the FBI or thought they were shadowed by the agency at one time or another. The Rev. Jesse Jackson, then a close aide to King, said no one suspected Withers was an informant. Although Withers had access to the leaders, he was not in any “decision-making, influencing position.”

“He was a basic photographer who was always around,” Jackson said. “He was a man we had high regard for.” Warner Dickerson, a former teacher who now heads the NAACP’s Memphis office and knew Withers well, said the photographer was “part of the ‘hood, disadvantaged and denied.”

Dickerson said Withers had selfish motives and committed a “subtle betrayal,” but he expressed sympathy for the man who had children to raise. “I don’t think he was a mean person, I don’t think he sold the race out,” Dickerson said. “You cannot ignore the fact that he needed money … It wasn’t like he gave information to the FBI who used that to murder my people.

“You have to walk in their shoes some time before you can understand what motivates them to do that.” To his children, Withers was just a photographer, a charitable family man and a believer in King’s message of racial equality.

Andrew Jerome Withers, Rosalind Withers and Frances Williams vow to do their own FOIA request and talk to the FBI themselves in efforts to clear their father’s name. “It will not diminish his legacy,” said Andrew Withers, known to friends as “Rome.”

“If you take a survey of Memphis, ask the people in the streets, you’ll probably get 10 out of 10 that say ‘I can’t believe it.”’

Perhaps their biggest concern, and one that was echoed by movement veterans like Memphis resident Maxine Smith, was that Withers is not alive to respond to the revelations.

“We know that his good name will overcome anything that has come to him in his death,” Rome Withers said. “He would be awfully mad for somebody to bring up an issue that has no proof.”