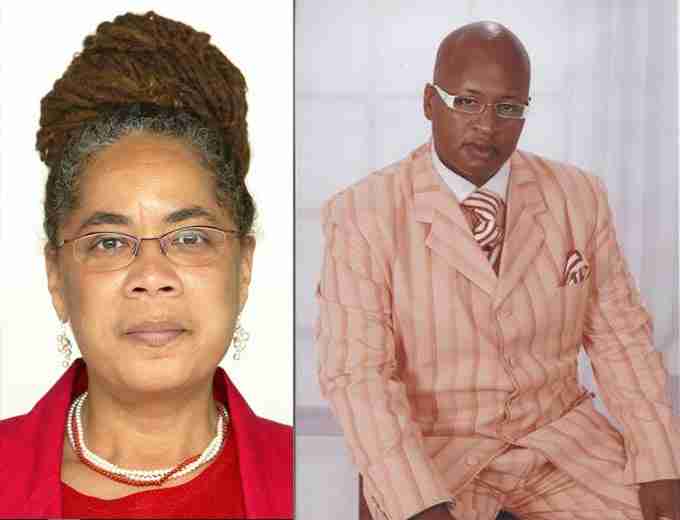 RIVIERA BEACH — The two African American members of the Palm Beach County School Board are fighting to keep their seats as they face re-election on Aug. 26. Dr. Debra Robinson, a 14-year veteran of the board, is for the first time in recent years facing a formidable opponent, Piaget “Peppi” Hendrix, who is also black, for the District 7 seat.

Marcia Andrews, who won election four years ago, is trying to fend off challenges from two white opponents, Joe Moore and Carla Donaldson.

The candidates faced off July 10  at Inlet Grove Community High School in Riviera Beach in a debate sponsored by the Coalition for Black Student Achievement, the Black Educators Caucus of Palm Beach County and the Black Youth Enrichment Association. All the candidates vying for seats on the board showed up. “That’s unprecedented,” said Ronald Leonard, president of the Black Educators Caucus.

Robinson, who was uncharacteristically subdued during the debate, found herself sometimes having to explain parts of questions to the audience and other candidates.

Asked if they support “Achievement Matters for All,” it was evident that many candidates were not familiar with the project which is a 57-step plan outlined in 1998 by the Coalition for Black Student Achievement and other community leaders.

The project was spearheaded by Robinson, who was at the time chairwoman of the coalition, and the school board endorsed it in 1999 as an initiative to close the achievement gap between black and white students.

The project helped Robinson win election in 2000 and she has become a strong advocate on the board for African-American students and the community.

Robinson’s opponent Hendrix, 43, is the son of Daniel “Dan” Hendrix, the first African American on the board, serving on from 1970 to 1978. Hendrix’s father was a college professor and his mother, Panchita Hendrix, was a long time music educator. He himself has taught school for 15 years and currently teaches at Westward Elementary in West Palm Beach, which he attended as a child.

Asked if they support Common Core, Robinson and Hendrix said they liked some things about the initiative but not others.

Common Core details what K-12 students should know in English Language Arts and mathematics at the end of each grade and seeks to  establish consistent educational standards across the United States and ensure that students graduating from high school are prepared for credit-bearing courses at two- or four-year colleges or for the workforce.

Florida initially adopted Common Core but Gov. Rick Scott has directed the state education board to withdraw from the

Partnership for Assessment of Readiness for College and Careers and he has changed the name to Next Generation Sunshine State Standards. “These are Florida standards…This is our state. We’re not going to have the federal government telling us how to do our education system,” Scott said at the time.

In February 2014, the state Department of Education approved 98 changes to the Florida standards, which are scheduled to be implemented in the 2014-15 school year.

“I support standards because we need to be clear about what a child needs to know by third grade,” Robinson said. “I’m glad to see that we are doing national testing. What I’m against is how we react to the testing – having adults being held accountable for the test results.” Hendrix is against the emphasis on tests. “Common Core, on it’s premise, is good but teachers should be allowed to do what’s best for their students. Testing is not teaching. We’re testing, testing, testing. We’ve got to get back to the basics. We’re not writing for a test, we’re writing for life,” he said.

Asked about poverty, Andrews, who is trying to hold on to the District 6 seat, said she has experienced it. “I have been poor,” she said. “It goes back to education, lack of jobs and not electing the right representatives. We have to fight against it.”

Asked the same question, Moore said equal access is the key. “Access to opportunity and access to education – those are the most important two components,” he said.

Donaldson, said she too grew up poor. “Lack of education and lack of a trade means there is no money,” she said.

support from the candidates. Robinson pushed for and organized the training which is put on by a group called “The People’s Institute.” Because the training is expensive, Robinson said not all teachers have been exposed to it as have upper level officials and board members.

Moore took the training while he worked as the district’s chief operating officer. “It was very rewarding,” he said. “We need to keep doing it and keep funding it.”

Donaldson, who describes herself as a parent advocate with the school system since 2001,  has also undergone the training. She said a lot of people were absent. “I support it 110 percent,” she said.

Andrews added that the program should be taken a step further. “There needs to be a mechanism for how we talk about [racism],” she said.

Hendrix said he backs the idea but it should be left to the schools to decide on it on a case by case basis. “I believe they should be offered to all schools but the stakeholders of that school would have to agree,” he said.

All candidates supported the Superintendent’s Graduation Task Force for Black Males, saying it is headed in the right direction.

Next post Africans scholars in training at Florida Intl.