Obama: 7 proposed regulations would each top $1B 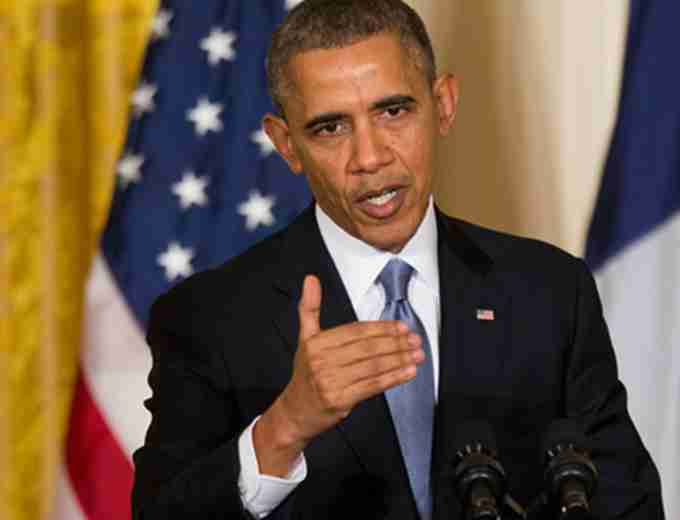 WASHINGTON (AP) _ President Barack Obama says his administration is considering seven new government regulations that would cost the economy more than $1 billion each a year, a tally Republicans will pounce on to argue that Congress needs the power to approve costly government rules.

[optinlocker]In a letter to House Speaker John Boehner, R-Ohio, Obama lists four proposed Environmental Protection Agency rules and three Transportation Department rules estimated to cost in excess of $1 billion. One of the proposed EPA rules _ an update to the health-based standard for smog _ is estimated to cost the economy between $19 billion and $90 billion.

The letter, dated Tuesday, comes as the Republican-controlled House prepares to consider legislation that would require congressional approval for any new regulations that would impose a significant cost on industries.

The four environmental regulations, which target air pollution and coal residue primarily from coal-fired power plants, already have been attacked by House Republicans, who have said they would kill jobs and harm the economy.

A federal court ordered the Obama administration to propose two of the four environmental rules.

And while the regulations would be expensive to comply with, EPA officials say they will save billions of dollars in avoided health care costs each year by reducing asthma and other illnesses, such as cancer. In some cases, the cost savings are greater than the upfront expense, according to EPA figures.

Obama’s letter was in response to a Boehner request last week for more details from the president on the proposed costs of the most expensive regulations under consideration by his administration. Obama’s administration has identified 219 proposed regulations this year with a cost to the economy of more than $100 million each.

Boehner, in a statement, said the administration should now release detailed cost estimates for all those proposed regulations.

“At a time like this, with our economy struggling to create jobs, it’s misguided for the federal government to be imposing so many new rules with such enormous costs, even when some of those rules may be well-intentioned,” he said.

Obama said a number of regulations being contemplated are in such preliminary stages of review that they have no reliable cost estimates.

The president said the seven proposals he did identify are not final and that his administration will “give careful consideration” to cost-savings. He said his administration already has made changes that have saved more than $10 billion in regulatory costs over the next five years, and said new regulations must meet cost-saving requirements that he ordered earlier this year.

He also defended his regulatory record, saying the cost of final rules adopted in 2007 and 2008, during the administration of President George W. Bush, were higher than in the first two years of his administration.

“In 2009 and 2010, the benefits of such rules _ including not only monetary savings but also lives saved and illnesses prevented _ exceeded the costs by tens of billions of dollars,” Obama wrote.