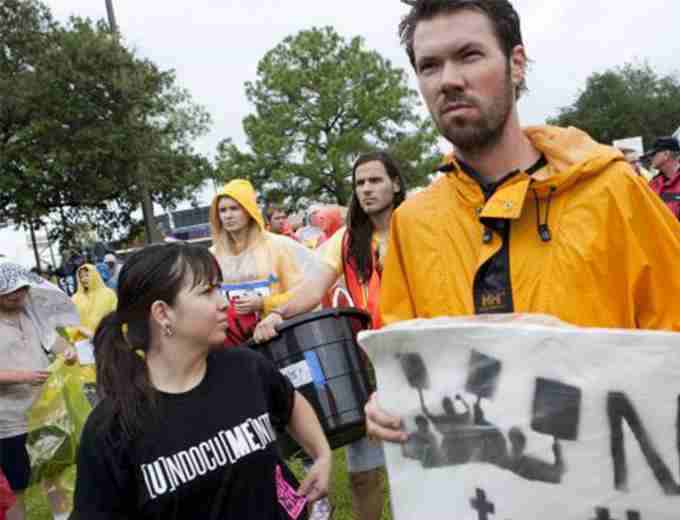 TAMPA, Fla. – Protesters blamed Tropical Storm Isaac and a massive police presence Monday for their weak attendance at the Republican National Convention, as only a fraction of the 5,000 demonstrators organizers had expected turned out to criticize the GOP’s economic and social policies.

[optinlocker]About 200 protesters gathered for the Coalition to March on the RNC’s rally in an empty lot near the arena where the Republicans will be nominating Mitt Romney as their candidate for president. There was sporadic heavy rain and winds were gusting at 35 mph at Isaac passed to the west of Tampa in the Gulf of Mexico. The Republicans themselves had cancelled most of their Monday activities because of the storm.

Florida labor organizer Jose Soto said 16 buses of protesters from New York, Miami and the Florida Panhandle cancelled because of the storm. He said the bus companies didn’t want their equipment and drivers heading toward a possible storm.

“It’s a calamity but all the people here are delegates for those who can’t be here,” said Soto of the University of Florida’s Graduate Assistants United local.

Protester Mick Kelly of Minneapolis said the organizing groups were going to carry on with a planned march later in the day, saying U.S. politics are dominated by the richest 1 percent.

“We demand and we will fight for good jobs,” he said.

Hundreds of police officers and heavily armed members of the Florida National Guard patrolled the streets of downtown Tampa. The protesters were required to conduct their rallies and parades in designated areas and along specified routes.

Jennings, who wore a pink, neck-to-knees vagina outfit decorated with sparkles, said she was protesting the GOP’s position against abortion rights.

“The right-wing agenda is turning back time regarding women’s bodies,” she said.

Cheri Honkala, the Green Party’s vice presidential candidate, told the crowd that, “On Election Day, we need to occupy the ballots.” She said more women need to be involved in the nation’s leadership.

Tampa Mayor Bob Buckhorn, a Democrat, said the protesters had been given additional space and given access to toilets and water.

“We are being supportive of people who want to come and want to offer an alternative opinion,” Buckhorn said.

But he said that police planned to respond quickly if groups broke off from protesters and were intent on damaging and destroying property.

“We want folks to know that we are here to help, but we are also here to stop you if you choose to do anything to the contrary of what we expect,” Buckhorn said.