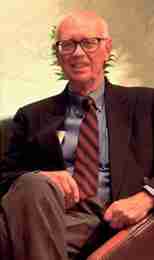 PARIS –Curtis Roosevelt, who lived in the White House as a child when his grandfather was president and worked for two decades at the United Nations, has died at 86.

The oldest grandchild of Franklin D. and Eleanor Roosevelt died of a heart at- tack in Saint-Bonnet-du-Gard in southern France on Sep. 26.

Curtis Roosevelt insisted in writing be- fore his death that he didn’t want a funeral service. Instead, according to his widow Marina Roosevelt, he said, “If you must do something, then get together and have a good time, with wine and cheese, and make awful martinis like my grandfather did.” Roosevelt’s childhood in the spotlight marked the rest of his life, as did his grandfather’s exceptional legacy. Curtis Roosevelt, born April 19, 1930 when his grandfather was governor of New York, was the son of Anna Roosevelt, the president’s eldest child and only daughter.

Curtis and his younger sister Anna moved in with their grandparents as his father Curtis Bean Dall’s stock market career suffered in the Depression and his parents divorced. Dubbed “Buzzie” and “Sistie,” they lived relatively shielded from the difficulty of the era, shuttling between Washington and vacations at the Roosevelt family estate in Hyde Park, N.Y.

The children lived in the White House for several years until their mother married a newspaper reporter John Boet- tiger/ “He never really got over those early impressions,” his sister Anna Eleanor Seagraves said Saturday from her home in Bethesda, Maryland. Their lives took different paths, and she described their relations as “cordial” but not close – until their elderly years, when they re-established a bond.

Curtis Roosevelt went on to work as an educator and political reformer in New York, and then became a diplomat at the U.N. from 1964 to 1983, where he notably served as liaison with nongovernmental organizations. He was following in the footsteps of his grandmother, Eleanor Roosevelt, who was a member of the first American delegation to the U.N. in 1945, and later served as chair of the U.N.

In his memoirs, Curtis Roosevelt had both praise and criticism for his grand- parents, seeing them as more engrossed in world politicking than family matters. But they always loomed large for him, Marina Roosevelt told The Associated

Roosevelt defended his grandfather’s efforts to hide his polio-stricken legs from the American public.

“FDR was a Victorian,” Roosevelt wrote. “You do not display your illness, and if somebody asks you how you are, you say, ‘Fine.’ Besides, he wanted a practical way to carry on with what he had to do and who he was.”

In 2005, Curtis Roosevelt joined grand- sons of Soviet leader Josef Stalin and British wartime leader Winston Churchill in a debate over the legacy of their grandfathers’ historic summit at Yalta 60 years earlier, which laid the groundwork for the post-war division of Europe and the Cold War.

“Nobody got what they wanted from Yalta except the Russians, who were in a position to get it,” Curtis Roosevelt said at the meeting at the University of Maastricht in the Netherlands.

He said that for his grandfather, the decisions made at Yalta were mostly about accepting reality after the United States’ late entry into the war. The Yalta conference took place as Stalin’s army was poised for the final attack on Berlin after occupying Poland. Stalin had the largest army in Europe, with 12 million soldiers, while Eisenhower’s 4 million men were still west of the Rhine.

Roosevelt’s fourth marriage proved the most lasting. Widow Marina hopes to fulfill his wishes for an informal memorial gathering at the Thanksgiving holiday in late November.

“It seems like an appropriate moment. He used to love Thanksgiving,” she said, describing big dinners in their French home with an eclectic guest list. “We could always find some lurking Americans.”

Curtis Roosevelt is survived by his widow, sister, daughter Julianna Roosevelt and half-brother John Boettiger of California, and a grandson.