Donald Trump is the Dennis Rodman of politics 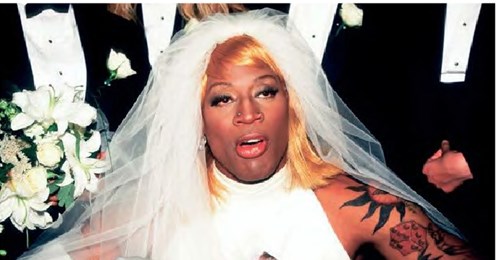 No one dislikes him and he immediately makes everyone feel at home around him.

Those who understand Rodman best are those who do not try to understand him; they simply accept him at face value and give him the freedom to be himself.

Everyone in the N.B.A. wanted Rodman on their team because they knew he would deliver on the court.

Never mind him wearing a wedding dress to his book release party in the 90s. He would show up late for practices and games; but despite this disruption, every N.B.A. team would have gladly taken him because he was viewed as a winner.

Notice the number of Hall of Fame coaches Rodman played for: Chuck Daley (Pistons), Phil Jackson (Bulls), and Greg Popovich (Spurs). These were coaches who had a firm grip on their teams and coached for N.B.A. teams that are all storied franchises as far as management goes.

Similarly, Donald Trump in many ways is like Dennis Rodman. You will go crazy trying to understand him with “conventional wisdom.”

Those who understand him best are those who don’t try to constrain and contain him.

They stand back and marvel at his ability to use the tool of “misdirection” to confuse his enemies.

Trump told us during the 2016 campaign that he likes to keep people guessing about him and his policies; well, he has not disappointed us in this regard.

Rodman wearing a dress had nothing to do with his prolific rebounding on the court, having led the NBA in rebounds seven straight years or him being named to seven NBA AllDefensive First teams; and most did not realize at the time that Rodman was paid $10 million dollars for wearing that dress. Now tell me who is the fool.

Many cringed at Rodman’s off the court antics and his total honesty when reporters asked him questions; but not one person in the N.B.A. would ever say Rodman didn’t make every team he played for better.

Similarly, people cringe at Trump’s tweets, his bluntness in media interviews, and his constant stream of consciousness in front of the media; but this is the same guy that got his tax cut in 2017 that gave us a bullish economy, that broke the ice with North Korea by doing a face to face, and put America’s interest above other nations.

Democrats, the radical liberal media, and Never Trumpers are still scratching their heads trying to figure out how Trump won the nomination in 2016, yet alone the presidency.

Despite the drama that constantly surrounds this president, most Americans believe he is fighting for the rights of and supremacy of America.

Most of the foreign leaders I talk to about Trump have great respect for his singular focus of putting the interests of America first and not the wishes of the European Union, NATO, or the United Nations which are all controlled by radical liberal globalist elites. These foreign leaders are all amazed that its taken this long for an American president to put their own country first.

So, Americans had to decide whether they wanted to win the global Mr. Congeniality contest like we did with former president Obama and were made to look weak; or elect Dennis Rodman, er Trump, and win championships, i.e., advancing a conservative agenda.

America overwhelmingly chose Dennis Rodman. America no longer wanted to lose with style, Obama; but rather they wanted to win with blood on their uniforms because they were in a fight.

Winning is winning. There is absolutely no consolation in losing!

Those who support Trump are loyal to him, despite all of his eccentricities, because they see in him a fighter, yes maybe even a bully; but he is fighting for values they believe in:

marriage between man and woman, genders are either male or female, protection of religious freedoms, pro-life, America’s interest above global elites.

Why other American presidents sold us out is a big question. Trump’s ascendancy to the presidency is America’s response to our globalist political elites from both parties here in the U.S.

Trump doesn’t seem to care about being popular; but rather advancing the cause of America around the world. And for this he is considered racist, isolationist, and xenophobic?

In the immortal words of my boy, Niccolo Machiavelli, “It is better to be feared than loved, if you cannot be both.”

Raynard Jackson is a Pulitzer Award nominated columnist and founder and chairman of Black Americans for a Better Future (BAFBF), a federally registered 527 Super PAC established to get more Blacks involved in the Republican Party.

Next post Will toxic lead water be the norm in poor cities?