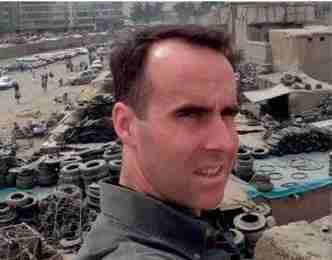 FAYETTEVILLE, N.C. (AP) – When Jason Criss Howk’s Army career came to an end in 2015, he thought he’d spend his days teaching and fishing.

But a wake-up call at a Pinehurst library changed those plans. And while Howk does teach, he’s found a new mission, too:

Explaining the Middle East, Islam and Muslim culture to a population that has little experience, but strong opinions on those topics.

At times, it has been a combative undertaking.

Howk has spoken at small rural churches across the Southeast and has, on occasion, had to be escorted to his car by church leaders at the end of the night.

But that hasn’t stopped his one-man mission to better educate America and, in the process, help promote tolerance. “It just hit me when I got out,” Howk said, “that Americans know nothing about Islam.”

His efforts have expanded since he retired. In 2017, he published “The Quran: A Chronological Modern English Interpretation” through Old Stone Press. The book is intended for audiences that have little familiarity with Islam, the Quran or Muslim culture.

And earlier this year, he launched a podcast called “We’re Just Talking About It.”

Howk’s interest in Islam is tied to his experiences as a soldier.

He served as an enlisted paratrooper in the 82nd Airborne Division in the 1990s and returned as an officer a decade later.

Howk, a retired major, finished his Army career as a foreign area officer with expertise in the Middle East and southwest Asia.

But his first experiences in that part of the world came as a paratrooper on a training mission to the United Arab Emirates in 1996.

“That was really the turning point,” Howk said.

His interest in the Middle East became a career focus. But Howk quickly learned that while the Army has been heavily invested in the Middle East and southwest Asia in recent decades, the majority of America had done little learning about those parts of the world.

Once he retired, Howk volunteered to speak at the Pinehurst library. He talked about his career, but afterward, those who attended the event had few questions about the Army. Instead, they wanted to know about Islam and Muslim culture.

“Americans had no clue,” Howk said. “All they knew was myths and misconceptions.”

That event launched other speaking engagements, often with church groups and with troops at Fort Bragg.

Howk balances those speeches with several courses taught at Sandhills Community College and lectures to members of the intelligence community.

“It’s really taken over the second half of my life,” Howk said, referring to his retirement.

But it’s the small-town speeches that Howk looks forward to most. Often his audience has never met a Muslim and has formed their worldviews on what they’ve seen on television.

Some label him a traitor. “I choose to go to skeptical audiences,” he said. “It’s about getting everyday people out to talk in everyday language.”

The country doesn’t talk about Islam, he said. And when it does, quotes are often taken out of context.

Howk, who was raised in a Baptist family, said he just wants to set the record straight and help the public understand.

“When I grew up, I didn’t know anything about Catholics,” he said. “You don’t usually study someone else’s religion.”

“I’m not there to defend or degrade,” Howk said. “I just want to answer questions and bring a better understanding.” Howk said misconceptions about Islam have only grown since the Sept. 11, 2001, terrorist attacks.

Government leaders have largely avoided the topic, he said. And that empty space was filled “by every bomb thrower and loudmouth in America.”

He said soldiers tend to be better educated, due to their time overseas or their interactions with Muslim soldiers. But rural Americans often don’t have access to those types of experiences.

In his speeches, Howk gives an overview of Islam and Muslim culture. He defines vocabulary words. And he patiently answers any question, so long as it isn’t hateful.

“I try to keep it nonpolitical,” Howk said. “I explain this big concept, and I take questions.”

Many of those questions have to do with terrorism, he said. And Howk is quick to knock down anything that might suggest Islam is more violent than other religions.

Howk said a Muslim is no more likely to commit a crime than a Christian. That’s what he stresses. There are no good or bad Muslims, he said. There are good and bad people.

Some people are receptive to his speeches.

“I’ve had people in their 70s and 80s who say I’ve changed their mind,” Howk said. But others are unwilling to listen.

“I think this is all about education,” he said. “I just want people to understand and make their own decisions. … That’s the best we can hope for.”

Super Bowl Gospel Celebration back on BET, back in Miami