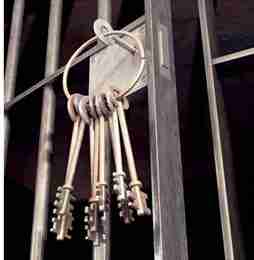 SERVING BEHIND BARS: Even though they will remain incarcerated for lengthy sentences, some inmates at a Texas prison are becoming ministers who serve other prisoners.

ROSHARON, Texas (AP) – Kenny Calliham sat alone in the dark of a prison cubicle when it finally hit him: He couldn’t live like that anymore. He needed something different, something better.

The Houston Chronicle reports years of drugging and fighting had gotten the Greenspoint man where he was, in the middle of a 45-year prison sentence for aggravated robbery. He’d squandered a shot at probation, destroyed relationships with those around him and gotten into “all the worst that prison had to offer.”

“I just looked at myself and saw that everything I’d started on my own had crumbled,” he said. But on a recent Monday, he started the process of rebuilding.

The 36-year-old was one of 35 prisoners graduating from the four-year seminary at Darrington Unit, a milestone marked by a jailhouse commencement attended by inmates’ families, high-ranking prison officials and state Sen. John Whitmire, D-Houston.

“Each and every one of us today is witnessing a miracle,” Whitmire told the new graduates, black graduation robes hiding their prison whites.

With the addition of the 2018 class, there are now 180 seminary graduates who’ve been sent out to do God’s work as field ministers at 26 prisons across the state, according to prison spokesman Jeremy Desel. By 2024, there will be field ministers on hand in all 104 Texas Department of Criminal Justice prisons.

Darrington was once known as a bad unit, plagued by violence and unrest. It was a place you didn’t want to be sent.

Now, men are vying to get into the maximum-security Brazoria County prison, competing for a few dozen coveted slots in the program funded by the nonprofit Heart of Texas Foundation and run by the Southwestern Baptist Theological Seminary, based in Fort Worth.

To qualify, would-be students need to have high school diplomas or GEDs, clean disciplinary records for the past year and at least 10 years left until their earliest possible release dates.

That last caveat is one that makes the seminary program stand out from many other prison offerings. While vocational programs and education typically aim to help inmates lead productive lives after their release, the seminary program is aimed at those who have long stretches of time left – and an interest in doing good works behind bars.

For four years they study rhetoric, Western civilization, health science and the Bible. They hole up in the library and take full-time classes instead of holding prison jobs, and they learn together in the groupings they’ll stay in when they’re eventually sent out to prisons across the state as graduates of the nondenominational program.

“There is a sense of community that develops among the students,” said Ben Phillips, the seminary professor who serves as the Darrington Unit’s program director. “For a great many of them, they really want to seize this opportunity and wring every ounce of value out of it.”

The Class of 2018 will fan out to units across the state in the coming weeks, walking in as the first field ministers newly dispatched to seven prisons from Huntsville to Rosharon to outside San Antonio. Prison officials say the program has been transformative and become a model for other states, which have sent high-ranking corrections officials to look in on the Lone Star State’s success.

“We’re doing it, and we’re doing it in ways that no other country or state in the world has done it,” said Grove Norwood, founder and CEO of the Heart of Texas Foundation, a nonprofit that works to provide Christian teachings to long-term inmates.