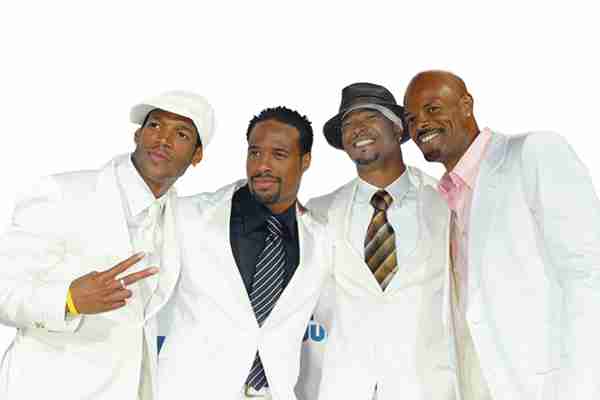 Successful individually and as a group, the Wayans Brothers have left their mark on the entertainment industry. The brothers have worked together on classic comedies such as the television series In Living Color, The Wayans Bros. and films Hollywood Shuffle (1987), I’m Gonna Git You Sucka (1988), and Scary Movie (2000).

Currently, Damon is adding to his ever-evolving resume with the development of his new mobile phone app, Flick Dat. The app allows users to create unique business cards featuring 30 seconds intro videos all shareable by the flick of the thumb. The app is available on iOS and Android devices.

Keenen Wayans is a multi-talented writer, director and producer. Keenen’s first hit film, Hollywood Shuffle (1987) showcased Keenen’s unique and hilarious point of view highlighting the plight of the black actor in Hollywood. In 1990, Keenen’s creative baby In Living Color exploded on the pop-culture scene. The television hit turned into a family act as Damon, Marlon and Shawn all appeared on the irreverent series that showcased Keenen’s deviously scathing social humor.

Keenen directed the hilarious horror spoofs Scary Movie (2000) and Scary Movie 2 (2001), which prominently displayed brothers Shawn and Marlon, and is one of the most successful feature films ever directed by an African-American. Most recently, Keenen directed White Chicks (2004); co-produced, co-wrote and directed Little Man (2006); and co-produced and co-wrote Dance Flick (2009).

Marlon Wayans is an actor, model, producer, comedian, writer and film director. His films have grossed more than $736 million in domestic box office, an average of nearly $50 million per outing. Marlon’s success transcends his comedy hits such as A Haunted House (2013), The Heat (2013), and A Haunted House 2 (2014), as the star has worked on dramatic films such as the critically acclaimed Requiem for a Dream (2000) and G.I. Joe: The Rise of Cobra (2009).

Recently, Marlon has partnered with former Funny or Die CEO Randy Adams to create WhatTheFunny.com an online destination for urban comedy. In February 2014, TBS announced a new comedy competition series featuring Wayans, “Funniest Wins,” which will run for eight episodes. The winner of the competition will star in a series on WhatTheFunny.com.

Shawn Wayans made his acting debut in his brother Keenen’s feature film, I’m Gonna Get You Sucka (1988). Following his feature film debut, Shawn joined the cast of the Emmy Award-winning comedy series, In Living Color. Shawn began co-writing his string of blockbusters including the smash Scary Movie (2000)where he played Ray, an ambiguously gay football jock. Shawn also starred in the box office hits, White Chicks (2004)and Little Man (2006), both of which he also co-wrote and co-executive produced.

When not on the road performing standup, Shawn can be found hard at work in the “lab” where he and his brothers are busy concocting their next project.

Marlon and Shawn Wayans have been a comedic force within the entertainment industry. The pair’s hit television sitcom The Wayans Bros. was the first WB show to be sold into syndication, after leading the WB network lineup for five years. They moved on to co-star, co-write and co-produce comedy classics such as Don’t Be a Menace to South Central While Drinking Your Juice in the Hood (1996).