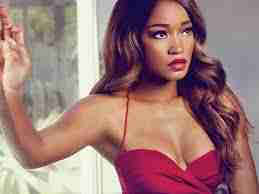 You probably best remember Keke Palmer on the small screen as True Jackson on Nickelodeon Network’s True Jackson, VP or as Akeelah on the big screen in Akeelah and the Bee but that teenager is now 20 and holds the title as the youngest talk show host in television history.

The multitalented Palmer will target millennials by covering a variety of topics including social issues, pop culture, fashion, relationships, celebrity interviews and more. The daily talker will feature an innovative set design with a heavy focus on social media integration.

People Magazine reports that when Palmer got the talk show, she called Queen Latifah for advice. The Queen told her “Be yourself, you’re a natural.”

The multiple NAACP Image Award-winner Palmer has ties to South Florida through her support for an all-girl after-school program, The Embrace Girls Foundation Inc.

“I’m asked often, why this organization?” said Palmer in a previously reported interview. “My mom and I came down to Miami back when Akeelah and Bee was released and had a tea party with the most intelligent, well behaved little girls we’d ever seen and simply fell in love with every aspect of the organization. We’ve been supporters ever since, so when the opportunity presented itself for me to select an organization that I wanted to ‘officially support’ I knew where my heart was – and it was with my Embrace Girls.”

In addition to appearances at the foundation, Palmer has made Embrace Girls her charity to receive support through Chideo (charity+video), a website where “fans can connect directly with their favorite celebrities for exclusive, online video content they can’t experience anywhere else – all while doing good.” Fans donate to watch exclusive videos of Palmer answering fan questions.

“We’re honored that the Palmer family has embraced our organization and supported us throughout the years,” said Embrace Girls CEO/Founder Velma R. Lawrence in a previous interview.

The BET talk show launched June 30. To watch past episodes go to bet.com/justkeke

Next post No monkey business in ‘Planet of the Apes’