Romance, survival mix in ‘The Mountain Between Us’ 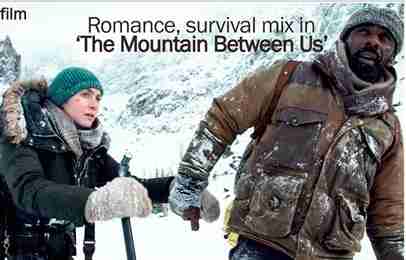 Kate Winslet and Idris Elba star in “The Mountain Between Us.”

“The Mountain Between Us” is about two strangers who survive a plane crash only to end up in the unforgiving snowy Utah mountains, with no cell reception and precious little food. So they do what comes naturally. They try to eat each other.

No, no, no. Are you crazy? They fall in love – kinda, sorta, maybe. Actually, perhaps they should have tried something else because this romance novel-meets-survival story doesn’t really succeed at either, despite fine performances by Kate Winslet and Idris Elba.

Based on Charles Martin’s same-named novel, the film is ably directed by Hany Abu-Assad and centers on the chance meeting at an Idaho airport of a photojournalist hoping to get home in time for her wedding and a neurosurgeon needing to get back East for an important operation.

An incoming storm shuts down all commercial flights and forces them to seek a charter plane, and it becomes one of the worst advertising for charter flights in history (Quick, sell your stocks).

The pilot fails to file a flight plan and then crashes after having a heart attack (thanks, Beau Bridges). The crash sequence is remarkable and we’re terrifyingly trapped in the fuselage watching it unfold. Our couple – and an adorable lab owned by the pilot – emerge battered but alive, hundreds of miles from anything.

The film then somewhat unsteadily balances a cute, getting-to-know-you budding respect between two tentative lovers and the raw ravages of survival, which include: cougars, thin ice and deep snow (thanks again, Beau Bridges).

There’s a bit of “Cast Away” and “The Edge” here, as if directed by Bear Grylls.

The screenplay by Chris Weitz and J. Mills Goodloe makes our couple opposites – she’s impulsive and has a deep pool of caring and empathy, while he’s methodical. He focuses on the brain, after all, and considers the heart just “a muscle.”

He thinks it’s wise to stay with the plane wreckage until a rescue team arrives; she thinks they have to venture out and rescue themselves. “Look, I don’t want to die up here because you’re too scared to take a risk,” she tells him.

He, in turn, calls her “reckless” and “selfish.” (His mysterious romantic life and refusal to talk about it also causes a rift).

Abu-Assad and cinematographer Mandy Walker are skillful at showing the freezing dangers our heroes face and do not romanticize the outdoors. They pace the growing affection between the man and woman nicely, too, not rushing the romance there either.

But it’s hard to know what’s churning inside these hearts during a struggle for bare survival. The kind of witty, rom-com dialogue that can illustrate deepening love over, say, a milkshake and in-line skating can’t be used here (where they’re butchering a cougar) so it’s up to the acting – lingering eyes, a jacket tenderly placed over a sleeping companion – and some weird flashbacks to that jacket tenderly placed over a sleeping companion – must suffice.

Elba, so cool at first, melts nicely, while Winslet (not completely convincing in an American accent) shows equal measure strength and softness.

Have they really fallen in love? Was it just situational? What happens when their normal lives resume? How did the experience change them? All that stuff is sort of dealt with in the final third of the film, but it fails to actually grapple with much of what happened on the mountain.

And the biggest question of all is left to the end – did they eat the dog? (No, no, no).

“The Mountain Between Us,” a Twentieth Century Fox release, is rated PG-13 by the Motion Picture Association of America for “a scene of sexuality, peril, injury images and brief strong language.” Running time: 111 minutes. Two and a half stars out of four.