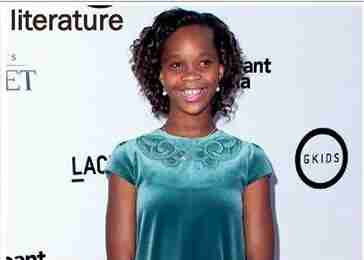 NEW ORLEANS – Quvenzhané Wallis, whose stunning portrayal of Hushpuppy in “Beasts of the Southern Wild” earned her an Oscar nomination at age 9, is launching a new career path.

The now 14-year-old is adding author to her resume.

On Oct. 3, through Simon and Schuster, Wallis released two children’s books: “Shai & Emmie Star in Break an Egg,” which chronicles the lives of two best friends at a performing arts school, and “A Night Out with Mama,” a picture book inspired by her experience at the Oscars.

Wallis said writing is a natural extension of her love for reading.

“Reading is one of my favorite things to do,” she said during a recent appearance in New Orleans at the Southern Independent Booksellers Alliance, a trade association representing over 300 bookstores in Florida, South Carolina, North Carolina, Georgia, Louisiana, Alabama, Arkansas, Tennessee, Kentucky, Virginia and Mississippi. “It’s something I would want everyone to do, especially teenagers my age. I don’t think we read as much as we should.”

Wallis said she doesn’t really have a favorite author and usually reads all types of genres. She said she especially enjoyed coming up with the concepts and working through them with co-author Nancy Ohlin, who helped with the writing on the current projects.

“The stories have a few things that I like and enjoy. For instance, there’s a part in the first one where a character is talking about her book bag and it’s turquoise, my favorite color. So there are small details in there that come specifically from me,” she said. “I definitely see myself doing more of this in the future.”

“We basically told them our interest or story line, what we wanted the books to be about and how we wanted to get her message out,” she said. “Then we found Nancy, who helped fine-tune her thoughts and put it together. From there, we would proofread and make sure it was said in a way she would say it and the books were formed.”

“Break an Egg” is the first in a series of chapter books set for release by the south Louisiana native, who weaves her creative and artistic life into typical teenage activities like playing basketball and volleyball and participating on her private allgirls school’s dance team.

The second book is scheduled for release in January and a third has a release date to be determined.

“I really hope that people my age enjoy reading these books,” Wallis said. “I’m excited about experiencing new things and sometimes it gets to the point where I might get a little obsessed with it. But I really enjoy writing and I can’t wait to do more.”

Wallis did a mini-book tour recently in New York. In addition, she’s scheduled for a signing at the New Orleans book festival on Nov. 11.

As for acting, Wallis said there’s nothing currently on the horizon.

“Just the books and school and sports,” she said.

Previous post Romance, survival mix in ‘The Mountain Between Us’