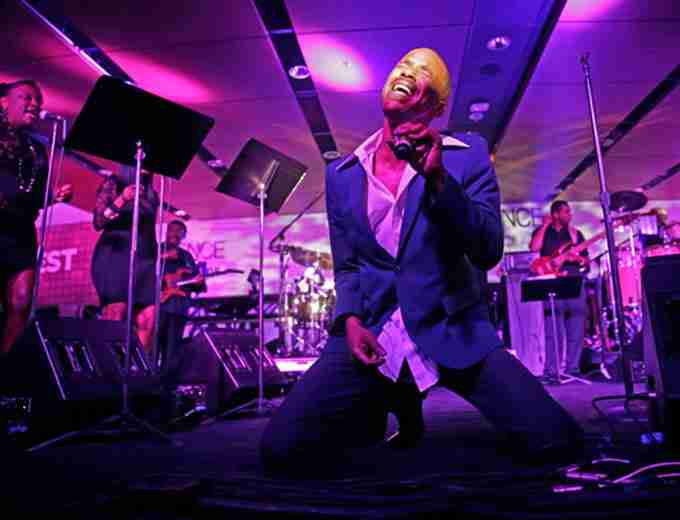 R&B singer Tevin Campbell, who thrilled fans as a teenager when he asked Can We Talk, recently performed for the first time at the Essence Festival as he seeks to re-ignite his career.

Campbell said he’s 37 now, but the voice that started him on his journey at age 11 is still with him. Campbell said he hoped to excite old fans and cultivate new ones who may not be familiar with hits that include Tell Me What You Want Me To Do and I’m Ready.
At an appearance last month in New York, Campbell gave the audience a taste of one his new songs, Addicted to Your Love and received what he described as positive feedback. “I mostly get asked, ‘Where have you been?’ and they’ll also say I look great and sound great – even though I’m all grown up,” he said.

Campbell said he’s currently recording and working with a bunch of different people, including production from Teddy Riley and singer Faith Evans. He said his dream collaborations would be with rapper Drake, Neo and T-Pain and duets with Beyoncé or Rihanna.
“There’s always a place for great music,” he said. “I think the music is a mix of everything I like from rock to rap but at my core, I’m R&B so it’s R&B,” he said.
He hopes to have two singles drop by the fall, with a full release sometime next year. “I’m independent right now and just trying to create some kind of buzz for myself. Ultimately, though, I’d be open for a 1 to 2 album deal,” he said.
That’s why, he said, he’s not taking his appearance at Essence for granted. “It’s kind of a big deal.” Fans heard some classics during his Saturday night set inside the Mercedes-Benz Superdome, where the festival was celebrating its 20th anniversary. It reported record attendance this year with more than a half a million attending.
After significant success in the 1990s and early 2000s, Campbell dropped out of the music scene in his 20s. He tells The Associated Press that he spent that time “being humbled by life’s experiences.”
“Everything was kind of a blur,” he recalled. “I was 11 when I started. By my 20s, there was a lot I didn’t know and a lot I needed to learn. It took me a long time to do that.”
In 1999, Campbell was ordered to attend Narcotics Anonymous meetings and an AIDS awareness class and fined after pleading no contest to a misdemeanor conviction for soliciting a lewd act from an undercover policeman. Campbell had been arrested in a police sting outside an elementary school in Van Nuys, California.
Campbell said after two successful albums – T.E.V.I.N and I’m Ready – he took time off to reflect on how his life was unfolding. “I went away to do Broadway,” he said. “That was a humbling experience, working as part of a group. I went to Australia. I just started living and all those experiences I’ve now included on my new project that centers on being humbled.”
“I think a lot of good things can happen as a result of this festival,” he said. “I’ve truly been blessed and when it comes to God and his blessings all I can do is be prepared.”