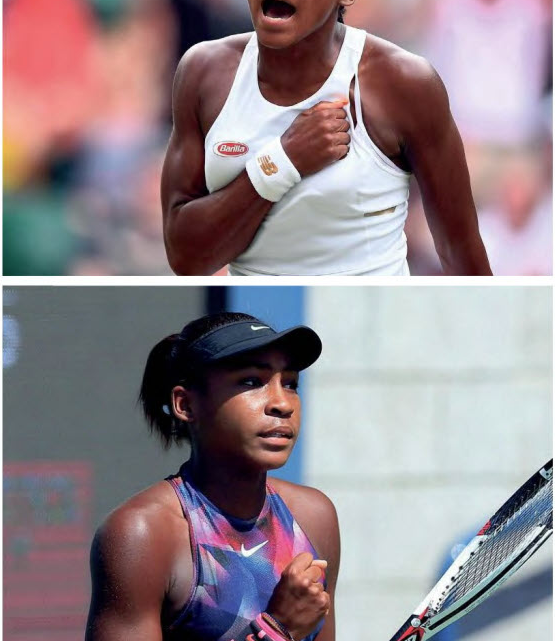 WIMBLEDON, England (AP) — A day after her memorable Wimbledon ended, Coco Gauff already was thinking about coming back.

“Obviously, there’s always room for improvement,” Gauff said in an interview with The Associated Press at the All England Club on Tuesday.

“I’m going to go and practice and improve some things,” the 15-yearold Floridian added, raising her eyebrows and smiling her infectious smile, “so that next time, I can win the tournament.” Well, then.

Gauff made quite an impression over the past two weeks at the grass-court Grand Slam tournament, accumulating a series of milestones — and a legion of fans around the globe.

“To say the least, a star has been born,” All England Club chief executive Richard Lewis said. “It’s good for the sport.

It’s good for the event.”

What stands out the most to her from it all?

“The most important point for me is just the match point after beating Venus. That was a moment that I will never forget,” Gauff said. “Watching the video, it seemed like it all happened quickly. But during it, I felt like I was on the court for like 20 minutes, when I dropped the racket and everything.”

She was ranked 313th when Wimbledon began and, by getting to the fourth round before losing to former No. 1 Simona Halep on Monday, is projected to jump into the top 150 next week. Gauff’s upcoming tennis schedule is a bit up in the air at the moment, in part because she didn’t expect to still be in England — and in part because of the tour’s restrictions on how many events someone her age can enter.

What is certain is that Gauff knows she can get better.

And that she very much wants to. “Maybe a year ago, when I lost, I kind of felt sorry for myself. And now I don’t feel sorry for myself. I just feel like: If you lose, that means you can always improve,” Gauff said. “I mean, I’m never going to be perfect, because you’re always going to lose matches. It’s impossible to win all of them. Even the more you lose, the more you need to improve, I guess.”

After a pause, she added with a “And even Roger Fedchuckle:

erer, even though he’s one of the greatest of all time, he still loses matches. So that means he still can improve.”

On Tuesday, she mentioned that she wants to tweak her serve — which, as it stands, reached 119 mph, a speed surpassed only by two women in the entire tournament. She also said about her forehand: “I don’t have a lot of confidence on that side and I think a lot of players know that.”

There’s work to be done away from the court, too: Gauff is about two weeks away from finishing her freshman year of high school, via the Internet-based Florida Virtual School. Her favorite subject: language arts. Her least: math.

Maybe that can wait until she gets home, whenever that is.

“I don’t even know what today is,” Gauff said with a giggle. “These past two weeks, I didn’t know what day it was. All I knew is, ‘Oh, I play tomorrow.’ My mind has just been somewhere else. I already had respect for the people who win (Grand Slam titles). But now, like, experiencing one and being to the second week, I have way more respect, because I can see how difficult it is to be able to stay focused for two weeks. It’s just a lot. It’s a lot. But I can see myself doing better in the future.”