Revamped OL will be Dolphins’ focus in camp 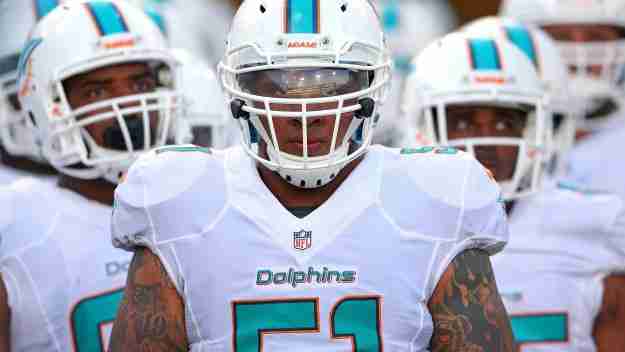 DAVIE, Fla. (AP) — Four games into the 2013 season, the Miami Dolphins’ blocking deficiencies were already apparent, with the team on pace to allow an NFL-record 72 sacks.

“If we give up 72 sacks, everybody should be fired — the whole offensive line,” guard Richie Incognito said.

The pace slackened, but the Dolphins still allowed a franchise-record 58 sacks, then sacked their offensive line. They begin training camp with new starters at all five positions.

The lone holdover from last year, center Mike Pouncey, is recovering from hip surgery and will likely miss at least the first couple of games. Incognito and tackle Jonathan Martin, both involved in the bullying scandal that soured last season, departed along with Tyson Clabo, John Jerry and Bryant McKinnie, who combined for 41 starts in 2013.

Sorting out replacements will be coach Joe Philbin’s top priority when training camp begins Friday. Here are some things to watch as the Dolphins begin six weeks of drills:

WHO’S GOING TO BLOCK?: The Dolphins thought they had acquired a long-term left tackle when they took Martin in the second round of the 2012 draft. They rebooted in March by signing free agent Branden Albert to a $47 million, five-year deal. Then they took Tennessee right tackle Ja’Wuan James with the 19th overall pick in the draft.

The guard spots remain up for grabs, and Miami also needs a fill-in for Pouncey.

New offensive line coach John Benton will try to retool a unit largely to blame both for the bullying scandal and for the Dolphins’ feeble offense. They led the NFL in sacks allowed, and top rusher Lamar Thomas scored just twice. The Dolphins managed only one touchdown in their final 24 possessions during a late-season meltdown that cost them a playoff berth.

NEW PLAYBOOK: Offensive coordinator Mike Sherman was fired after the Dolphins finished 27th in yards, and replacement Bill Lazor brought with him a new system. The Dolphins are expected to throw more and run plays quicker. Reviews during offseason drills were mixed.

“The guys are moving fast,” defensive end Olivier Vernon said. “They’re doing a lot of things I’ve never seen before. They confuse the heck out of me sometimes.”

“When you’re out here running these plays for the first time, it may not be pretty,” he said. “We’re all figuring things out.”

TANNEHILL’S TIME: The Dolphins’ 17th starting quarterback since Dan Marino has given the team stability at the position, starting all 32 games in his first two NFL seasons.

But if Tannehill is to keep his job, he needs to improve on his 15-17 record. He knows it.

Tannehill has thrown 30 interceptions and been sacked 93 times in two seasons, which adds up to a lot of negative plays. And he backslid at the end of last year, going 30 for 67 for 286 yards in the final two games, both losses.

The Dolphins are especially eager to see an improvement in his accuracy on long passes. Tannehill repeatedly misfired deep to speedy Mike Wallace, who averaged only 12.7 yards per catch and scored five times, both career lows.

SECONDARY SHAKEUP: Pro Bowl cornerback Brent Grimes is back to anchor a secondary that was one of Miami’s strengths last year. But cornerback Nolan Carroll and safety Chris Clemons departed in free agency, ensuring a new look for a unit that ranked second best in the NFL in 2012-13 in touchdown passes allowed.

Free agent acquisition Louis Delmas is a lock at safety and might represent an upgrade over Clemons, but there will be a scramble for playing time among several cornerbacks. Contenders include Jamar Taylor and Will Davis, who saw little action as rookies last year because of injuries, and former All-Pro Cortland Finnegan, trying to mount a career comeback after starting only five games for the Rams in 2013.

MISI IN THE MIDDLE: Miami moved outside linebacker Koa Misi to the middle during offseason drills, and the experiment is expected to continue at the start of camp.

The Dolphins want better tackling and more big plays from their linebacking corps, but didn’t address the position in free agency or the draft. Dannell Ellerbe and Philip Wheeler will likely be the other starters in Miami’s 4-3 scheme.