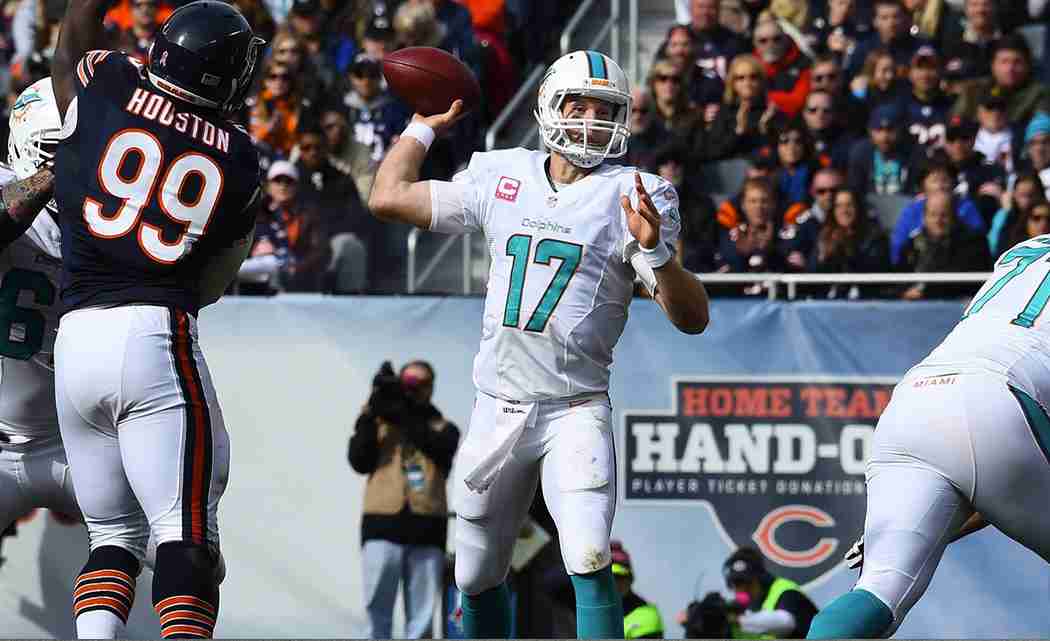 CHICAGO (AP) – Ryan Tannehill and the Miami Dolphins had the perfect response to a heartbreaking loss. They went right back to work.

The result was a clinical performance for the quarterback and a big road win for his team.

Tannehill threw for 277 yards and two touchdowns, and the Dolphins got back on track with a 27-14 victory over the listless Chicago Bears on Sunday.

“We were making plays on offense. I think the guys were getting open, and we were able to hit them,” he said. “That’s the name of the game is to have protection, the guys get open and me make the throw. We were able to put it together today as an offense.”

Tannehill connected on his first 14 passes and was 25 of 32 overall, helping Miami bounce back from a brutal 27-24 loss to Green Bay. It looked as if the Dolphins were on their way to a big win over the Packers before Aaron Rodgers threw a 4-yard touchdown pass in the final seconds.

Dolphins coach Joe Philbin said he felt good about his team’s mindset after it had a great practice on Tuesday.

“That kind of set the tone for the week,” he said. “Guys came in the building, had great workouts, great meetings, the work on the practice field was very good, so I think all of us had a lot confidence the team was going to play well.”

Lamar Miller also had a 2-yard touchdown run for the Dolphins (3-3), who had lost three of four since an opening victory over New England.

The Bears (3-4) remained winless in three home games and have dropped five of their last seven at Soldier Field dating to last year. Matt Forte scored two touchdowns and Jeremiah Ratliff finished with a career-best 3 1/2 sacks.

“This was a very, very disappointing loss to our football team,” coach Marc Trestman said.

That frustration was evident in the postgame locker room, where there was some sort of shouting match before the media were allowed into the room. It was unclear who was involved, but the raised voices could be heard in the concrete corridors of Chicago’s longtime home.

Jay Cutler threw an interception and lost a fumble as Chicago dropped to 0-4 when he throws at least one pick. He was 21 for 34 for 190 yards after he threw for 381 yards in last Sunday’s 27-13 victory at Atlanta.

The Bears trailed 14-0 before Cutler passed to a wide-open Forte for a 10-yard touchdown on their first possession of the second half.

Miami responded with a 13-play, 81-yard drive that ended with Miller’s fourth rushing touchdown in the last three games. Tannehill set up the key score with a 30-yard run on fourth-and-1.

Forte added a 1-yard touchdown run in the fourth, but that was it for the Bears. Cameron Wake had a strip, sack and fumble recovery, and Caleb Sturgis kicked two field goals to help the Dolphins put it away.

“Coming off a really tough loss last week, we had to turn the page,” Wake said. “We had a great week of practice, great week of preparation. I think the confidence just ran the locker room as a whole.”

Miami got off to an inauspicious start when Tannehill was sacked by Ratliff on its first play from scrimmage. But the Dolphins quickly made up for lost time.

Tannehill threw for 176 yards in the first half, picking apart Chicago’s defense with ease. He found tight end Charles Clay for 13-yard score, and then had a 10-yard TD pass to Mike Wallace in the back of the end zone.

The Bears, Meanwhile, looked listless and out of sorts. Linebacker Shea McClellin, back after being sidelined since Week 2 by a hand injury, slipped in coverage on Clay’s TD, and the offense was hurt by curious play calling and Cutler’s seventh interception.

NOTES: The Bears lost rookie CB Kyle Fuller to a hip injury in the third quarter. He was first announced as questionable to return, but the Bears announced in the fourth that he would miss the rest of the game. … Miami improved to 4-1 at Chicago. The Dolphins also won in their previous trip to Soldier Field, 31-13 on Nov. 5, 2006.