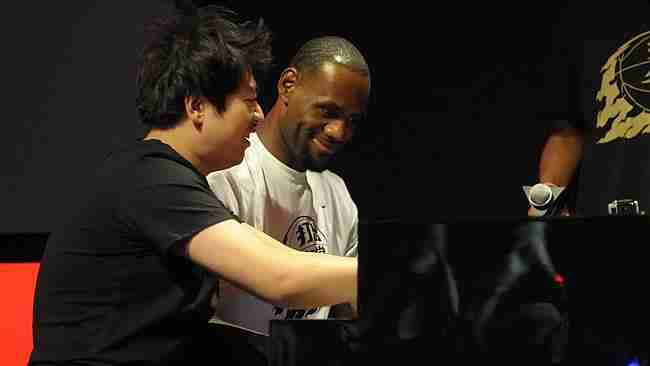 BEIJING (AP) — LeBron James began his tour of China on Monday by exchanging gifts with another former child prodigy.

The Cleveland Cavaliers’ star was greeted by pianist Lang Lang at the Wukesong Sports Center in Beijing in front of hundreds of basketball fans.

The two exchanged gifts, with Lang Lang receiving a pair of basketball shoes and James getting an album of Lang Lang’s music and a CD with the FIFA Brazil World Cup music.

The two stars also played the piano together – a “piano dunk” as Lang Lang called it.

“Every time I come here, the game of basketball grows more and more,” James told the crowd. “It’s been great all the way from before I came to 2008 Beijing Olympics and all the way now for me to come back in 2014. The game continues to rise and I think that’s amazing.”

The five-day trip is being sponsored by Nike. James will also be visiting Guangzhou and Hong Kong, and two cities in Taiwan – Kaohsiung and Taipei.

Earlier this month, James left the Miami Heat after four seasons and four trips to the NBA Finals and re-signed with the Cavaliers, where his career began.

Previous post Revamped OL will be Dolphins' focus in camp