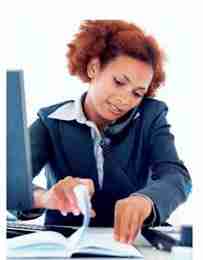 WASHINGTON – Years of steady hiring and economic growth have delivered a cumulative benefit for at least one group that hasn’t always shared in America’s prosperity.

The unemployment rate for AfricanAmericans fell to 6.8 percent in December, the lowest level since the government began tracking such data in 1972. The reasons range from a greater number of black Americans with college degrees to a growing need for employers in a tight job market to widen the pool of people they hire from.

“The African American unemployment rate fell to 6.8 percent, the lowest rate in 45 years. I am so happy about this News!” President Donald Trump said in a tweet Saturday.

Still, the rate for black workers remains well above those for whites and some other groups, something experts attribute in large part to decades of discrimination and disadvantages.

Robust job creation has lowered unemployment for all Americans. U.S. employers added nearly 2.1 million jobs in 2017 – the seventh straight year that hiring has topped 2 million. The U.S. economy gained a hefty 5.7 million jobs in 2014 and 2015 alone.

But there are also less-happy reasons for the lower unemployment rates: Fewer Americans are either working or looking for work. (People who aren’t actively seeking a job aren’t counted as unemployed.) An aging population means there are more retirees. Young Americans are also staying in school longer before job-hunting.

And some people, perhaps discouraged about their prospects, have given up looking for work and so aren’t included in the unemployment rate.

Here are some questions and answers about African-Americans’ record-low unemployment rate:

Q. GIVEN THE RECORDLOW UNEMPLOYMENT RATES, IS THIS THE BEST JOB MARKET EVER FOR BLACKS?

A. Not necessarily. As with nearly all demographic groups, a smaller proportion of blacks have jobs now than before the Great Recession, in part because of retirements, more people staying in school and discouraged would-be workers.

The best job market for African-Americans might actually have been in 2000, when 61.4 percent of black adults were employed, the highest proportion ever. That figure fell below 52 percent in the depths of the recession, and is now 57.9 percent.

The same pattern occurred for other groups.

Q. Why is the AfricanAmerican unemployment rate higher than the rate for whites?

A. The main reason is discrimination, according to most research. Valerie Wilson, director of the Economic Policy Institute’s program on race, ethnicity and the economy, notes that even when AfricanAmericans have similar levels of education or experience, their chances of being unemployed are higher.

“That’s what begs the question of what else could be the major reason,” Wilson said.

Nancy DiTomaso, a business professor at Rutgers University, says her research has found that whites likely benefit from networks of family and friends that don’t intentionally exclude blacks or other minorities. Yet, nevertheless, their networks have the effect of helping whites get jobs more readily than blacks.

Q. What about other ethnic and racial groups?

A. Everyone is benefiting from the healthy job market. The unemployment rate for Latinos was 4.9 percent in December, just above the record low of 4.8 percent reached in June.

And the jobless rate for Asians was 2.5 percent in December, just above the record low of 2.4 percent set in 2006.

Q. What factors have helped lower unemployment for African-Americans?

A. One major reason, Wilson says, is that many more black Americans are college graduates than in the past. That doesn’t completely offset the effects of discrimination. But among all groups, college graduates have lower unemployment rates than those with less education.

Another driver is economic: When the national unemployment rate falls to ultra-low levels, employers typically cast wider nets to find the workers they need. As they do so, they typically start pulling in more people from historically disadvantaged groups. These include jobseekers with less education as well as racial minorities.

With the current U.S. unemployment rate at a 17year low of 4.1 percent, that appears to be what’s happening.

Some economists want the Federal Reserve to hold off on raising the short-term interest rate it controls for exactly this reason: Raising that rate could slow growth just as the benefits of the economy’s expansion are spreading to disadvantaged groups.

Q. Where might the unemployment rate for AfricanAmericans go from here?

A. It depends on the economy. Most economists expect healthy growth this year, fueled in part by the Trump administration’s tax cuts for individuals and companies. That should lower unemployment for all Americans.

The African-American unemployment rate is highly volatile and could rise or fall noticeably in the months ahead. It’s down from 7.9 percent a year ago.