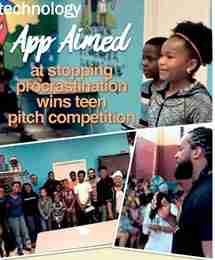 Anderson and Joseph won $1,000 for their app concept, No Pro, which helps students increase their grades and stop procrastinating. When asked how they thought of it, Anderson said she used her own personal experience.

“I know that I procrastinate a lot on my homework so I decided to help other children,” Anderson said.

She said she was relieved when she found out they’dwon because she thought a girlwith a great idea about helping people with their hair was going to win.

“I was really excited. I felt relieved because my heartwas aboutto jump out of my throat,” Anderson said.

Anderson, who said she began teaching herself to code on code.org over a year ago and currently receives help from hertechnology teacher, aspires to be an app developer when she grows up.

“I would like to build apps because I love coding. My favorite line of code is actually C++ because it helps me do my work,” Anderson said.

Her advice to her peers who may want to pitch tech ideas in the future is to think of solving a problem they might face because chances are others face it too.

“All you have to do is try your best and just think of any idea that would be something that you would want to happen to you,” Anderson said. Anderson and Joseph will split the prize money.
She plans to give her $500 in winnings to charity.