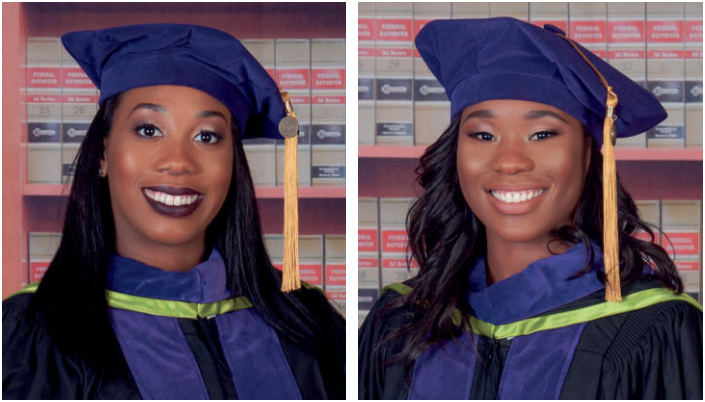 A ﬁrst name is not the only thing best friends Ashley Stewart and Ashley Adkins share. They share a common career goal and are also members of the Florida A&M University College of Law graduating class of 2020.

Stewart and Adkins grew up together in Pembroke Pines, Fla., where they met in kindergarten and have been together at the same schools ever since. After graduating high school their friendship journey did not stop there.

They both decided to further their education at the University of Central Florida (UCF). While Stewart studied sports and exercise science, Adkins chose to study speech language pathology.

After graduating from UCF, Stewart and Adkins had an interest in law school. This would be yet another journey they would take together in their lives.

“We then both took a gap year to work full time but decided to go to FAMU Law after learning how broad law is and how we can use it in our different career areas,” said Stewart.

Being together every step of the way has been beneﬁcial to their development as law students. They keep each other motivated and on track just as they did when they were young.

Now onto bigger and better opportunities, both Stewart and Adkins are preparing to take the Florida Bar exam. When this milestone is achieved, they hope to work in either Miami or Orlando.