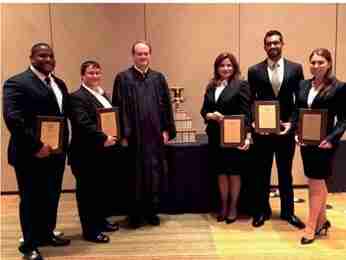 “Our students are smart, savvy, and tough,” said Professor H. Scott Fingerhut, Assistant Director of the Trial Advocacy Program, “and they are willing to do what it takes to be champions – a deep desire to achieve and the willingness to put in many hours of practice, on weekends and long into the night.”

Three FIU students were finalists for the Best Advocate Award, another first for the university. .

The team members are Kelly Scott, Elroy John, Megan Roth and Dane Stuhlsatz. With Kelly and Elroy serving as dual advocates (the trial lawyers on both sides of the case, plaintiff and defense), this team went undefeated through four rounds, beating the University of Miami, the University of Florida, national powerhouse Stetson, and St. Thomas in the finals.

Power-ranked first among all 16 teams after the preliminary rounds, Scott and John were also among the finalists for the Best Advocate Award, with Scott winning the prize.

The second team of semi-finalists include Selena Gibson, Juan Mercado, Anabel Miguelez, Arvind Singh and Erica Weintraub. This team too went undefeated in the preliminary rounds, knocking off Nova and Florida Coastal, before falling to tournament finalist St. Thomas in a very close semi-final round.

The members of the championship team will share the $2,000 competition first prize. And for her Best Advocate award, KELLY SCOTT earned an additional $1,000.

“Winning is great, to be sure,” Fingerhut added, “but the real take-away is the grace our students display, even in – especially in – the heat of trial, a reflection of their consistent commitment to excellence and FIU’s special brand of passionate principled advocacy that Professor H.T. Smith, our Program Director, and I strive to instill as we cultivate the next generation of great trial lawyers.”

The Zehmer teams were coached by Professor Fingerhut, along with Ari Goldberg, COL ’09, a Trial Team alumnus, and an Adjunct Professor in Trial Advocacy beginning next semester, and Pallavi Garg, an alumna of Washington University School of Law in St. Louis and an Assistant State Attorney in Miami.