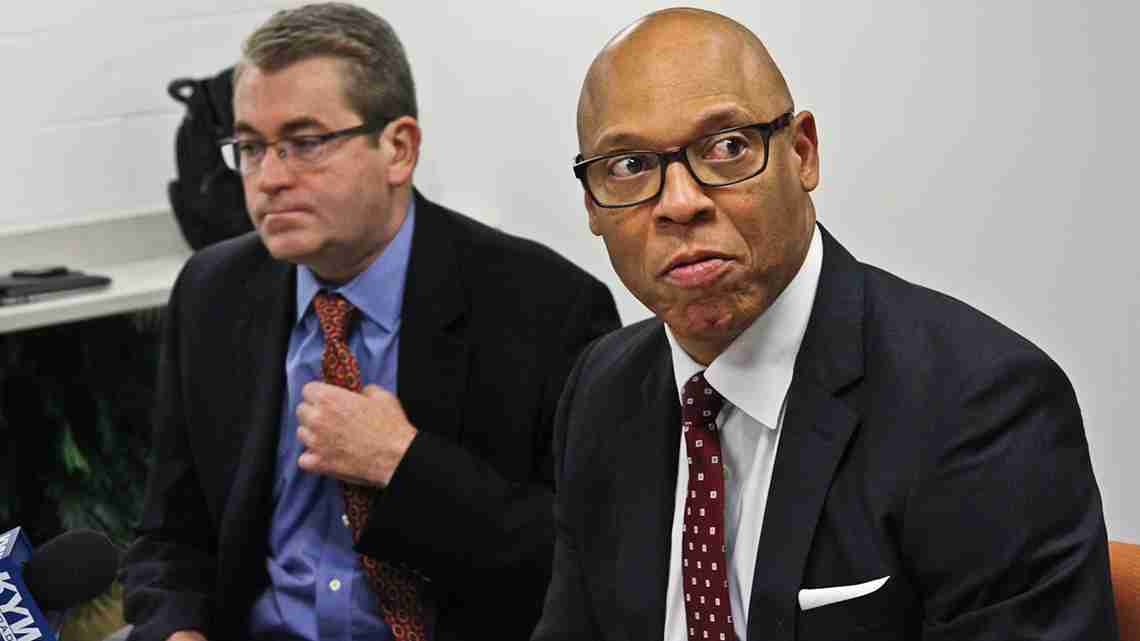 BY MARYCLAIRE DALE, PHILADELPHIA (AP) – Philadelphia teachers vowed to fight a sudden move by the district Monday that cancels their union contract and forces them to start paying health premiums of as much as $140 a month.

The teachers union, with about 15,000 members, accused the state-led School Reform Commission of ratcheting up its “war on teachers.”

However, district leaders said there was nothing else to cut after years of funding woes that have prompted nearly $1 billion in cuts that includes the loss of 5,000 positions and the closure of 30 schools. Many Philadelphia schools operate without a nurse or librarian on duty.

“If the contract is blown open, what’s going to happen to things that matter to our kids, (such as) student class size?” said Anissa Weinraub, 34, a high school English teacher who has gone through several layoffs and three forced transfers in nine years. “I’m nervous about what else might be imposed.”

Both Superintendent William R. Hite and Philadelphia Federation of Teachers President Jerry Jordan, along with Mayor Michael Nutter, agreed that the problem lies in the state funding formula for education.

“The cuts by the commonwealth over the last few years have had a devastating financial impact on the school district and the quality of education,” Nutter said. “There’s no debate about that.”

Hite nonetheless backed Monday’s decision, saying the money would yield more than $50 million a year for classroom and other needs.

“Requiring teachers and other employees to contribute to their health care costs is a change and a sacrifice, but contributing to health care benefits is the reality of today’s workplace,” Hite said in a letter to parents.

The announcement came at a brief, hastily-called meeting of the School Reform Commission early Monday. Jordan called the process “cowardly.”

District officials said they have no plans to cut wages. Union members would pay about $55 to $140 per month for health care premiums, and face other benefit cuts, starting in December, unless the move is challenged in court. Jordan suggested that was likely.

The district, one of the nation’s largest with 135,000 students, perennially struggles with a structural deficit caused by rising pension and health care costs and payments to charter schools, which serve an additional 65,000 students.

“Corbett’s School Reform Commission has amped up a war on teachers and support staff,” AFT President Randi Weingarten said in a statement. “The commission would rather attempt to impose a contract than work with teachers to figure out what is best for Philadelphia’s kids.”

Officials said the benefit concessions were on a par with those made by administrators and other workers in recent years.

“Philadelphia families have made extraordinary sacrifices: students come to school every day in buildings that lack critical resources necessary for teaching and learning,” said SRC Chairman William J. Green, a longtime Philadelphia councilman appointed to the post by Corbett earlier this year. Corbett holds three of five seats on the panel.

Corbett just two weeks ago signed off on a $2-a-pack cigarette tax in Philadelphia, which city leaders had sought to raise $83 million a year for the school district.

“Today’s action by the SRC will effectively close the funding gap and provide the district with the ability to hire new teachers, counselors and nurses, and secure educational resources that will benefit the students of Philadelphia,” Corbett said.

One Democratic lawmaker, Rep. Mike O’Brien of Philadelphia, called the SRC’s vote to break the contract “an exercise in union busting.”

“It’s certainly a violation of all laws dealing with collective bargaining,” said O’Brien, who predicted a legal fight.

City schools have been under state control since 2001, but have always worked under a negotiated contract. Under the takeover law, teachers do not have the right to strike.

Staff writer Marc Levy contributed to this report from Harrisburg.