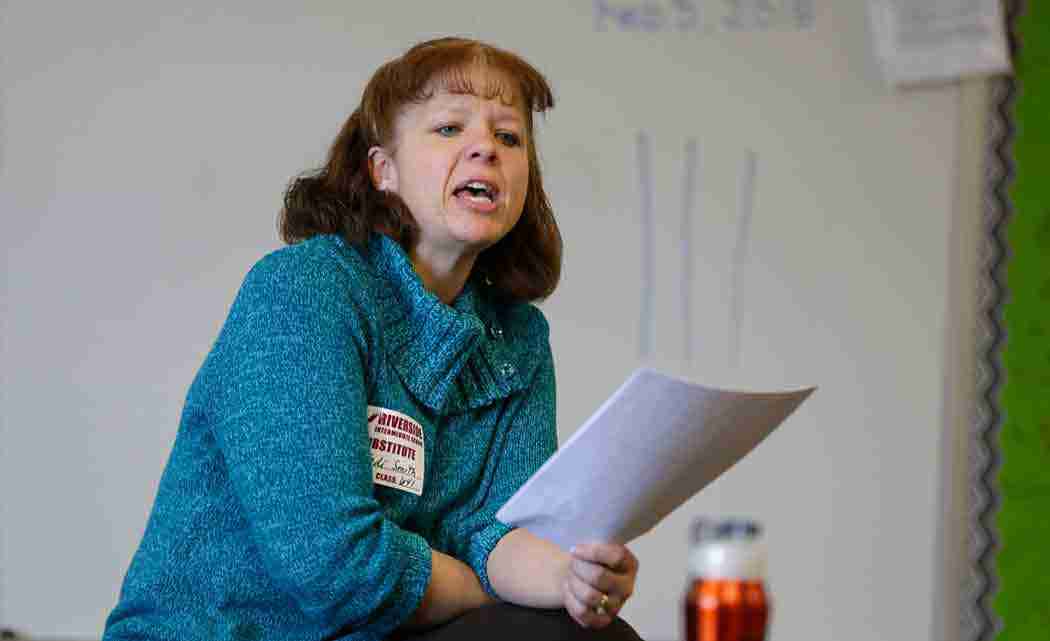 SOUTH BEND, Ind. — Carrie Swing wasn’t alarmed when her fifth-grade daughter, Ivy, spent a day in a first-grade classroom at her San Francisco school, filling out worksheets and helping younger students read because no substitute could be found for her absent teacher.

But when it happened the next four days too, Swing became so concerned that she considered quitting her public relations job to homeschool her daughter.

“The situation was really awful,” Swing said. “The kids had a sense of, ‘Nobody’s in charge here,’ and I think that was really hard on them.”

Although Ivy’s school represents an extreme example, districts throughout the country have reported struggles finding substitute teachers. School officials say the shortage worsened as the unemployment rate improved, and job seekers who might have settled for a part-time job such as substitute teaching are now insisting on full-time positions with better pay and benefits.

Geoffrey Smith founded the Substitute Teaching Institute at Utah State, which in 2008 spun off into an online training program for substitutes. He said he’s unaware of any national statistics about unfilled substitute teaching posts, although an unscientific survey conducted by his organization last year found 48 percent of districts responding reported severe or somewhat severe shortage of substitute teachers.

In Washington state, a preliminary survey late last year by the Office of the State Actuary found 84 of 94 school districts that responded had trouble finding substitutes.

In West Virginia, lawmakers voted in 2013 to require central office administrators to fill in for absent teachers three days a year because of a shortage.

Gary Zgunda, director for human resources and student services at Hamilton Southeastern Schools in Fishers, Indiana, 15 miles northeast of Indianapolis, said the school district this year is able to fill about 93 percent of its openings, down from 97 percent last year.

A frequent source of substitutes has been education majors looking for experience. But officials say fewer college students are choosing teaching as a career path, in part because of recent layoffs and concerns about new education standards, including efforts in some states to link teacher evaluations with student test scores.

“There have been so many stories about the quality of public education that many of us have conjectured that really impacted both students and their parents to say, ‘Why would I go into education and face all of that?'” said Jill Shedd, assistant dean for teacher education at Indiana University.

Because of the shortage, many schools find alternatives. In middle schools and high schools, teachers often are paid extra to forego preparation time to fill in for absent teachers.

“Standing in front of a classroom without any training is kind of scary to them,” Smith said. “So it’s raising the pay with training that tends to help alleviate the shortage.”

Those willing to substitute can be selective. Jodi Smith, who lives in the Indianapolis suburb of Fishers, has a master’s degree in international affairs and knows she could earn more money elsewhere. But she works as a substitute teacher about three to four days a week, mostly to keep the same schedule as her children, who are in fifth and eighth grades.

“I get to drive them to and from school,” she said. “I get to know the teachers in the building and the kids and then I have a little bit more information on what’s going on.”

The alternatives to substitutes all have drawbacks, officials say. Dividing classes into other rooms make it more difficult for teachers to be effective, and not all classes learn at the same pace. Using other school staff also causes problems, detracting from administrative duties.

In northern Indiana, some school districts have raised substitute teacher pay to try to help ease the problem. Elkhart Community Schools, which for years has paid the district’s retired teachers $100 a day to substitute, began offering the same rate retired teachers from elsewhere.

Tressa Decker, principal of Horizon Elementary School in Granger, Indiana, said the substitute shortage at her school was so severe that she even recruited her mother, a retired high school English teacher, to teach first grade.

“The 5-year-olds told her what to do, and she did great,” Decker said.

Next post Streaming TV services: What you get, what it costs