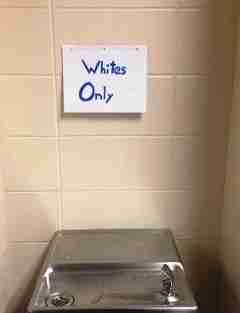 ELKHART, Ind. – A northern Indiana teacher has been placed on paid administrative leave after telling students to place “whites only” and “blacks only” signs near drinking fountains and bathrooms in the high school as part of a social studies assignment.

Concord Community Schools Superintendent John Trout said in a statement released to The Elkhart Truth the teacher wanted to demonstrate the feel of government-sanctioned segregation.

Trout says the teacher didn’t seek approval from the school or the school district to perform the assignment. He said “sometimes a teacher makes a mistake when attempting to educate young teenagers.” He says the signs were removed when school officials became aware of them.

Trout says the teacher, who has not been identified, will remain on leave while the school district investigates.