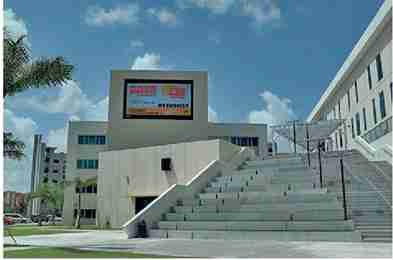 MIAMI – People familiar with the National Academy of Television Arts and Sciences (NATAS) know it as the organization that dispenses Emmy awards each year. What people might not know is the Academy also supports deserving students by awarding scholarships. Three Miami Dade College’s (MDC) North Campus students were recently awarded scholarships in the fields of television production and broadcast journalism by The Suncoast Chapter of NATAS.

This year’s recipients are all students in MDC’s renowned School of Entertainment & Design Technology (SEDT). Natalia Gonzalez is pursuing a Bachelor of Applied science, in Film, Television & Digital Production. Javier Molina is working towards an Associates of Science in Radio and Television Broadcasting. Shawn Ebanks is pursuing a degree in Mass Communications/Journalism.

The scholarships awarded to SEDT students are highly coveted within the industry, since NATAS is the professional service organization dedicated to the advancement of creative leadership for artistic, educational and technical achievements within the television industry. The winners, all of whom must maintain a GPA of 3.5 or above, will receive scholarships ranging from $1,000 to $5000 for college tuition, books and supplies.