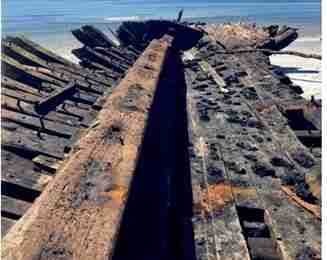 The Tallahassee Democrat reports unclear which of the 15 ships, or how many, that grounded on the Franklin County barrier island during the storm 119 years ago were exposed by Michael.

Facing the Gulf of Mexico, the wooden ships now rest in plain view near the west end of the island.

State officials say resources are being used for more urgent hurricane recovery efforts, and there are no plans for state archaeologists to visit the site.

The 1899 hurricane crossed over the Florida Keys into the Gulf of Mexico where it strengthened into what would be classified today as a Category 2 storm.

Next post IN FLORIDA, BIDEN CALLS ELECTION FIGHT FOR 'SOUL OF AMERICA'