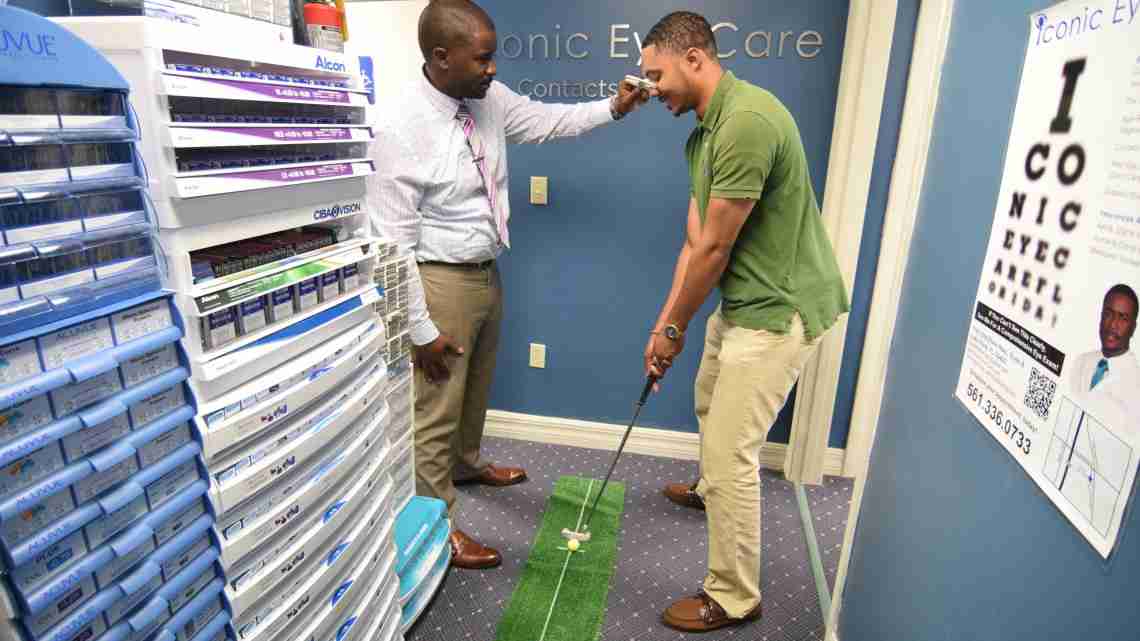 The boutique center is the brainchild of 31-year-old Dr. Adam Ramsey, and is the only black-owned private optometry practice in Palm Beach Gardens.

At the anniversary celebration, Ramsey publicly unveiled his own line of Iconic frames, which are exclusive to his shop.

“I chose the name Iconic to set the bar for myself,” Ramsey said. “If nobody wants to copy what I’m doing then I’m probably doing the wrong thing. (It means) I’m not changing the way optometry or vision is done or the personal patient/doctor relationship. My goal is to make Iconic Eye Care the new standard of eye care in Palm Beach County.”

As a result, Ramsey said he takes his time to diagnose and treat his patients’ issues. He prides himself on going beyond the traditional eye exam to detect the early warning signs of more serious issues like diabetes, hypertension, high cholesterol, etc. “My office is not built on volume. You can either have quality, price or speed – and you can only pick two out of the three … I have chosen to pick quality as my number one thing,” Ramsey said. “The way I do business is caring. I treat everybody like they are my brother, sister, mother or aunt. They’re not just a name … it’s more of a relationship in my office.”

Gregory Newborn said he has been Ramsey’s patient for almost four years and has referred coworkers, family, friends and neighbors to his practice.

“He’s an awesome doctor,” Newborn told the South Florida Times. “I never actually went to an eye doctor that took the time that Dr. Ramsey does in explaining what’s going on with your vision. I go there and my daughter does also. I was very impressed with the detail and the patience that he has with his patients.”

A native of Trinidad and Tobago, Ramsey moved to Florida when he was eight-years- old. He attended Stranahan High School, the University of Florida and the Southern College of Optometry (SCO) in Memphis, Tennessee to obtain his Doctorate degree.

Ramsey said most of his products are exclusive to his practice in the Palm Beach area and people have begun to identify the unique frames with his office.

Ordered from all over the world, Ramsey said his frames are made from an array of products including recycled materials, wood, metal, buffalo horns, and even frames that will have a tree planted when purchased.

“Almost 70% of glasses are unique in the office and I did that on purpose,” Ramsey said. “It’s gotten to the point where people will ask if patients have gotten their eyewear from Iconic. The idea of having unique, special and one-off frames is extremely rewarding.” 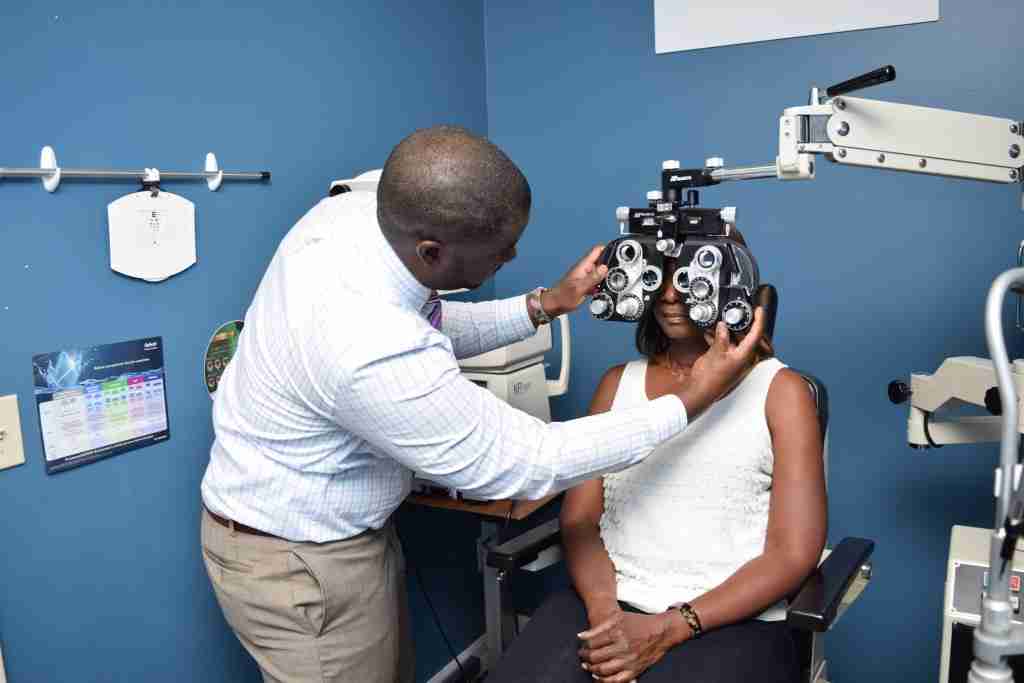 Dr. Adam Ramsey chooses quality over speed when doing eye exams to make sure his patients are well taken care of. Photo Courtesy of Ronald Sookam.

According to Ramsey, Iconic has also been successful at fitting difficult contact lens and pairing practicality with personality.

“I try to tailor my office to people that want a story, a personality or a conversation piece … who see eyewear as a fashion statement and not just a medical device,” Ramsey said. “If nobody asks you about your eyewear, then I probably didn’t do my job.”

Raised by a single mother, Ramsey said he understands the importance of giving back because as a kid many poured into him.

“I’ve been blessed, and I feel like I’ve been blessed to be a blessing,” Ramsey said. “I remember being the kid at the Boys and Girls Club or the YWCA and my mom putting me into every single after school program. Somebody gave their time to me, which is why I’m here today … and I purposely try to pay it forward.” 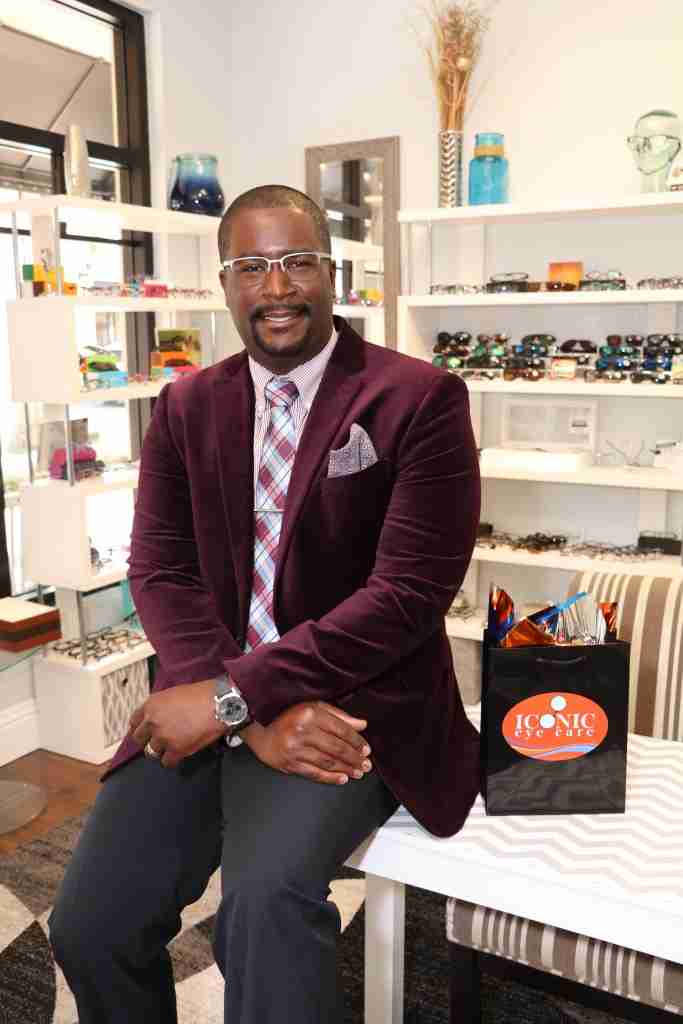 Because of this, Ramsey hosts several events annually and donates proceeds to benefit a charity of his choice. Past recipients have included the Palm Beach YWCA and Mothers Against Murderers.

“I want to showcase that anything is possible. You are enough. You are good enough and everything you need and want is inside of you. I say to kids, I was you. I was that kid at the Boys and Girls Club,” Ramsey said. “Don’t let limitations stop you. Just go for it and don’t let anybody tell you that you can’t do this.”

Big on ownership, Ramsey wants to see more blacks enter the optometry field and open their own practices.

“I’m big on ownership. … My mom always taught me to own something and have something that’s yours because then I can actually employ people and contribute to others’ households and make sure they’re being well taken care of. Nobody can hire and fire you when you work for yourself,” Ramsey said.

Though Ramsey has received awards for his work – including Young Professional of the Year – he is big on giving credit where it’s due.

He said he’s just doing his job and doesn’t think he deserves all the shine. He said he wouldn’t be successful without the support of his wife Chrissi, his staff, an array of businesses and organizations who partner with him and the community.

“I have the best staff in the world. If you don’t have the right people around you, people that will follow you and allow you to be great, it’s really useless.” Ramsey said. “The support from the community has been tremendous. They’ve really shown love and gone above and beyond.

… It’s better than I imagined. Even when I was planning it out, I could not imagine the first year going the way it has … it’s actually pushed me to do more than I intended.”