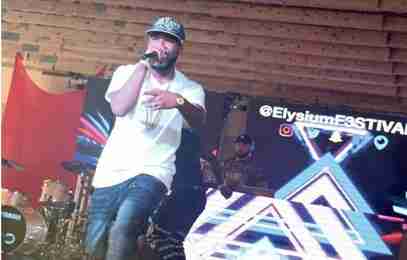 On Saturday, Homestead danced to a different tune as artists and DJs took center stage at Harris Field Park.

Elysium Music Fest – an EDM and Hip-Hop festival featuring 32 artists, 14 DJs, graffiti, a car and bike show, food trucks and more – united some of South Florida’s most well- known artists with talented individuals from around the country.

Admission was $25 in advance and $30 at the door; but as part of their vision to help the community, festival organizers allowed attendees free entry from 12:30 p.m. to 12:45 p.m.

Artists and DJs were featured on two stages offering something for everyone, no matter how young or old. People from all walks of life came from Fort Lauderdale to

Homestead in South Florida for a common goal: To promote unity among local churches and create an impact in the community. For the local artists, the event provided an opportunity to gain exposure and grow their fan base.

“I was surprised by H.O.G. I never heard of him before, but will now follow,” said Racquel Rose, who attended the event with friends.

Rose said she believes in the power of an event like Elysium because it, “spreads the gospel in an entertaining way, reaches to the younger generation who love music, and gives them musical choices apart from what’s in the secular world.”

Like H.O.G, many artists who were heard for the first time gained a new following after the event.

Artists like Benjah and Reconcile, who headlined the event, were among the crowd’s favorites.

But talented women were not in short supply as Angie Rose, Butta P, DJ E. Liz and Bateeza represented with all the talent and energy the crowd expected.

Besides music, the event had car and bike cruising and food trucks. Guest speakers filled the stage with messages of hope and transformation, while some even took part in water baptism.

For fans, artists had music and merchandise available on-site – as well as the opportunity to meet and speak with them on a one-on-one basis.

Though it is only its first year, the event captured the attention of local media and many attendees.

Artists and attendees alike were grateful for an event like Elysium Fest and expressed their desire to continue to be a part in the years to come.

“I believe events like Elysium are most necessary because they represent unity, which we as a “church’ are strongly lacking,“ said Sean Olivera, performer and MC.

As MC, Olivera was pleasantly surprised the crowd kept up energy and enthusiasm until the very end of the event, which lasted from 1 p.m. to 10 p.m. “The impact events like these can have on the community are honestly endless,” said Olivera.

Elysium Festival was created with the purpose of gathering the faith community of South Florida. The vision goes beyond a yearly event filled with music and entertainment. As a non-profit, Elysium Fest plans to partner with other non-profits, local churches and businesses to address the issues that affect the local community and bring about positive change in South Florida.