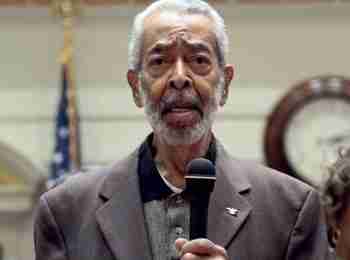 OKLAHOMA CITY – Oklahoma’s first black state senator, one of the state’s most prominent civil rights leaders, died at his home in Oklahoma City, his daughter said.

E. Melvin Porter, who held protests with civil rights icon Clara Luper and fought to keep the state’s only historically black university open, died Tuesday after contracting a fever while in hospice care, daughter Sonya Porter said. He was 86.

Porter, who grew up in Okmulgee, was the second black member of the Oklahoma Legislature, according to the Oklahoma Historical Society. He served as a Democratic senator from 1965-1987, pushing for the state’s Anti-Discrimination Act and the inclusion of black history in textbooks.

“As an attorney, he provided a lot of services free to those who could not afford to pay for an attorney,” his daughter said. “As a public servant, I believe that was his total goal, was equality for all people.”

Porter served in the U.S. Army until 1952, when he received an honorable discharge. He became one of the first black graduates of Vanderbilt Law School in 1959. He also served two terms, begin- ning in 1961, as president of the Oklahoma City branch of the NAACP, the nation’s oldest civil rights organization.

In a 2007 interview with the Vanderbilt Lawyer, Porter said he faced discrimination practicing law in Oklahoma City and was the target of racial obscenities.

“I faced more racism in legal practice than I ever dreamed I would face from both judges and lawyers,” Porter told the publication. “The legal profession totally shocked me with its entrenched, hardcore racism.”

When Langston University, Oklahoma’s historically black college, faced legislative proposals in 1978 to close the school in the wake of declining enrollment, Porter was one of the lawmakers who helped preserve it. This remained one of his proudest accomplishments, his daughter said. The state Senate’s leading lawmaker re- leased a statement Wednesday saying Porter’s work made Oklahoma a better place for all citizens.

“His election to the Senate in 1964 was a historic achievement for our state,” said Senate President Pro Tem Brian Bingman, a Republican from Sapulpa. “The entire Senate honors his accomplishments and the positive impact he made on Oklahoma, and we extend our thoughts and prayers to Senator Porter’s friends and families during this difficult time.”

Nine more black Oklahomans have been elected to the Senate since Porter’s initial victory in 1964, according to a Senate release. Porter is survived by seven children and his former wife, with whom he remained close after they divorced, his daughter said.

Next post How to teach children to give back