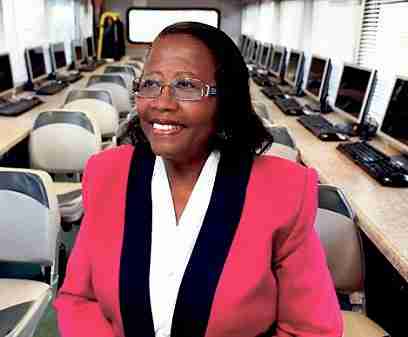 The light on Estella’s Brilliant Bus has dimmed for the moment.

Estella Pyfrom, the founder and proprietor of Estella’s Brilliant Bus, succumbed to illness Wednesday, Dec. 29, surrounded by family. She died of complications from a blood disease. She was 85.

Pyfrom is known nationwide as the ﬁercely devoted and spry senior who started a movement to assure that many in underserved communities ended up on the right side of the digital divide.

She didn’t want technology to leave impoverished families behind. So at the ripe young age of 75, she took $1 million of her and her husband’s personal ﬁnances and converted a tour bus into a computer lab, outﬁtted with state-of-the art computers.

Thus was the beginning of Estella’s Brilliant Bus, in 2011. She drove the bus to underserved communities and taught kids computer skills that she hadn’t begun to learn herself until she was 70.

“She drove the bus and the bus drove her,” said her son, Juan Pyfrom, regarding her drive and motivation to her mission.

Her story caught the attention of heavyweights. During his administration, President Barack Obama and ﬁrst lady Michelle invited her to the White House, along with President George H.W. Bush, for Bush’s Points of Light Program.

Pyfrom was the 5,000th “point of light,” an honor bestowed upon citizens who changed the kaleidoscope of ordinary persons with their kindness and generosity. Both presidents and their wives greeted Pyfrom and her husband at the White House for the ceremony.

Perhaps most surprising was the humble educator learned in 2014 that Oprah Winfrey was planning to honor her in Miami. She and Winfrey ended up embracing and in tears as Oprah honored her for her courage in pursuing her dreams as a senior citizen. Winfrey also wrote about her in her in “O" magazine column, and wrote the foreword for Pyfrom’s book, “The Legacy of a Humble Black Woman.”

Before Pyfrom made national headlines later in life, her family says, she already had made a tremendous impact on the thousands of children she taught for 50 years as a Palm Beach County School District educator.

“We have got to be one of the most loved couples in the world,” said Willie Pyfrom, her husband of more than six decades. “Together we have taught so many kids and impacted so many students we’ll never be able to count them all,” added the man who himself taught for more than 60 years. “We are so blessed.” Both spent much of their lives in the Glades where they grew up. Both are graduates of Florida A&M University, and she is a lifetime member of the Alpha Kappa Alpha sorority.

A celebration of life ceremony will be closed to the public due to the covid surge.

There will be a viewing that the public is welcome to attend on Friday, Jan. 7, from 5 – 7 p.m. at New Bethel Baptist Church, 1100 West Avenue, Belle Glade.

In lieu of flowers, supporters and wellwishers may make donations to estellasbrilliantbus.org to carry on her legacy.

Estella Pyfrom is survived by her husband and childhood sweetheart Willie Pyfrom, their four children Gene, Juan, Karen and Mia, their grandchildren and great-grands, as well as other relatives and friends.

Her son Juan says in time the family will have an idea of the landscape of Estella’s Brilliant Bus, but will likely carry on her legacy through the establishment of a foundation in her honor.