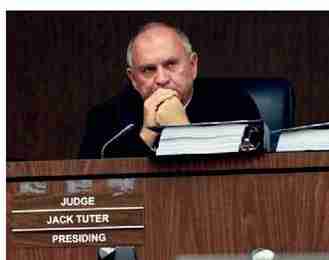 Broward is launching a new court to help keep non-violent lawbreakers out of jail.

The “Community Court” is getting a jump-start with a $200,000 grant from the Center for Court Innovation, a nonprofit that supports outside-the-box solutions to problems within the justice system.

In a first for Florida, Broward’s 17th Judicial Circuit is one of five such federal grant recipients across the nation. The nonprofit center partners with the U.S. Department of Justice’s Bureau of Justice Assistance.

“Our court is focused on therapeutic treatment for people charged with non-violent crimes,” said Chief Judge Jack Tuter, who pushed for the grant.

“The idea is to have service providers in the courtroom.” Arranging for homeless people picked up on municipal code violations to go directly to shelters, for example, avoids pre-trial jail warehousing.

The Fort Lauderdale venue is just the start, Tuter said. “We want to move it around. It is basically moving the court to where the population is.”

The Broward court system, the city of Fort Lauderdale and Broward County are working together on the new court, Tuter said. Jeri Pryor, homeless intervention administrator for Fort Lauderdale, was the successful grant-writer. The money will be used to hire a program manager and for other start-up costs.

Tuter learned about the availability of community court grants at a May conference in Birmingham, Ala. “Community courts seek to improve neighborhood safety and engage residents in solving local problems,” the center’s website says. “Researchers have documented that community courts help to reduce recidivism and the use of jail while improving public trust in justice.”

The first community court opened in 1993 in Midtown, Manhattan, and now there are more than two-dozen – held in libraries and other non-traditional venues.

Long before seeking the grant, the chief judge was keenly aware of the connection between homelessness and pre-trial incarceration. Late last year, the subject received some attention when Broward Outreach Center shelters stopped accepting referrals from Mental Health Court.

However, that didn’t solve the systemwide problem, Tuter acknowledged at the time. “There’s something wrong with housing people in the jail who have committed minor, non-violent offenses,” he said.

The chief judge responded to the problem by assigning a full-time firstappearance judge to focus on pre-trial release and other methods of keeping people out of custody unless and until they are convicted.

He knew there were limits to how much the court could accomplish independently. “It’s a societal issue that the county and city will have to wrestle with,”