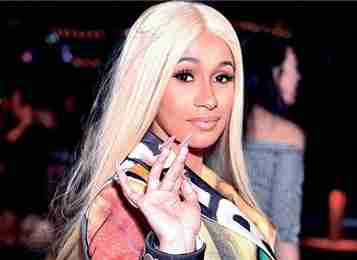 PHOTO COURTESY OF OF HOLLYWOOD LIFE

MIAMI BEACH, Fla. – Royalty, Real Housewives and the fathers of two Kardashian babies were among the celebs that fanned out across Miami for a week of glamorous parties toasting the world’s best artists during Art Basel.

Less than 24 hours after announcing she was splitting from her husband, Cardi B was spotted Wednesday night partying at 24/7 ultra-club E11EVEN MIAMI, sporting long, rainbow streaked hair and a skin-tight black dress. She grabbed the microphone and sang along when the DJ played her hits, including “Bodak Yellow” and “Drip,” which features her ex, Offset.

G-Eazy and Travis Scott also gave separate performances at the all-night club over the weekend. Neither Kylie Jenner nor Kanye West were with Scott when he performed on top of the DJ booth and asked the crowd to put away their cell phones so they could enjoy the moment.

And at the private upstairs club at Casa Tua, Basel regular Leonardo DiCaprio hung out with U2’s Bono at a late-night karaoke party where Paris Hilton and Serena Williams danced to Beyonce’s “Formation.”

Downstairs at the exclusive Italian restaurant, Princess Eugenie hosted an intimate seated dinner for the Londonbased art gallery Hauser & Wirth where she serves as director.

Art Basel Miami Beach, the prestigious extension of the annual contemporary art fair in Basel, Switzerland, didn’t officially open until Thursday, but the fair has become so popular that it’s spawned dozens of others around Miami along with star-studded parties days in advance.

One of the biggest draws of the week was at the RC Cola Factory in Wynwood, where rappers Kanye West and Lil Wayne gave surprise performances to honor late rapper XXXTentacion for the posthumous release of his album Skin. Kanye brought down the house as he performed their new song “One Minute”

with the late rapper who was gunned down in South Florida this year.

Lil Wayne performed again at an intimate party for Republic Records at the Confidante Hotel, telling the crowd he hoped they were having so much fun during the over the top week of parties that they “don’t make it back to where you’re from because you just don’t want to leave here.”

On Saturday night, Pharrell teamed up with American Express Platinum for a private beachside concert at the swanky 1 Hotel South Beach.

One of the things he loves most about Art Basel is the way it brings “the curious youth here to see what it is you can do when you grow older if you continue to hone in on art in the way that you love it,” he said. “I love being in an environment that fosters creativity.”

The “Happy” singer’s new restaurant, Swan and Bar Bevy, proved to be one of the hottest reservations of the week. Kanye West dined there with Kim Kardashian’s bestie Jonathan Cheban.

Rocker Lenny Kravitz joined Pharrell one night and Leonardo DiCaprio and Bono were also seen enjoying a quiet dinner together.

The two-day event with Bacardi featured performances by Meek Mill, Fat Joe and A$AP Ferg at night. By day, The Dean Collection gives artists free space to exhibit their work, along with a rare deal that gives 100 percent of sales directly to the artists as part of his No Commission theme. The art aficionado, who is married to Alicia Keys, has talked about his desire to promote starving artists.

Celeb supporters included supermodel Adriana Lima who was an eyeing a piece by artist Jamel Shabazz, saying it had an “old school” feel that she thought would inspire her in her home gym when she’s working out.

The late night crowd headed to nightclub Rockwell, which teamed up with 1OAK for a three-night pop-up that included performances by hometown rapper Rick Ross. He brought Meek Mill onstage and the two performed their new song “What’s Free.”

“Last year this time Meek Mill was in prison. Right now he’s got the album of the year,” Ross said.

Courvoisier also hosted an after-hours bash in Wynwood to close out the weekend Saturday that featured art installations and a performance by rapper and avid art collector 2 Chainz.