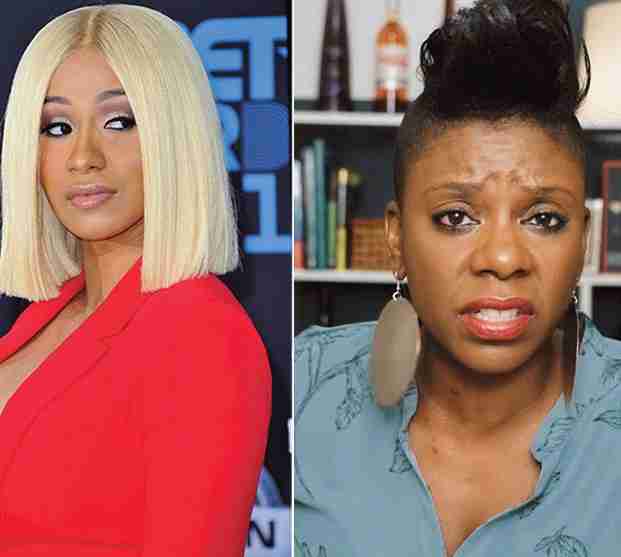 Belcalis Almanzar, also known as hip hop artist Cardi B., happily hugged her lawyers in a federal courtroom in Atlanta Monday after a jury awarded her $1.25M in damages against YouTube celebrity vlogger, LaTasha Kebe. In a landmark lawsuit that was watched closely by YouTube content creators, bloggers, subscribers, and more than likely other interested celebrities, Cardi B. walked out of court victorious. She successfully slayed the proverbial dragon and, in the process, possibly changed the landscape of social media.

Cardi B. ﬁled a defamation lawsuit against LaTasha Kebe, also known as Tasha K, and her YouTube channel, “UnWine With Tasha K” in the spring of 2019 after unsuccessful attempts to pressure Kebe to remove vile, slanderous videos about her. There are 38 videos in total on the channel that feature Tasha K ranting and raving, making untrue claims about the star. The videos contain unsubstantiated allegations that Cardi B. was a prostitute, had contracted various sexually transmitted diseases, committed sex acts with inanimate objects, and other vicious falsehoods. One video that garnered massive views was an interview Tasha K. conducted with a former stripper who claimed she was Cardi B.’s roommate years ago in New York. In court last week, Tasha K admitted that she knew the former stripper had lied about knowing the rapper but refused to make a retraction or remove the video from her channel. That video has received over 2 million views to date. A more explicit video where Tasha K falsely announced that a then pregnant Cardi B. had herpes and that her soon to be born child would have “special needs” received 4 million views. During the twoweek trial it was noted that evidence provided to the court by a medical specialist late last year had proven that Cardi B. did not have a sexually transmitted disease and a psychiatrist testiﬁed under oath that she was indeed went into a “severe depression” and was “suicidal” behind the false accusations. But Tasha K continued to build her social media empire through her popular YouTube channel and a crew of supporters she lovingly calls “wineos.”

SOCIAL PHENOMENON YouTube was started in 2005 by former PayPal employees Chad Hurley, Steve Chen and Jawed Karim. The site was supposed to be a video dating service, but viewers uploaded everything but dating proﬁles to YouTube. A year later, Google purchased the site for $1.65B. YouTube in its beginning years was known for crazy cat videos, comedy sketch uploads, and human-interest recordings. The ﬁrst ever YouTube video to go viral was of Baby Charlie who bit his brother’s ﬁnger back in 2007. That same year the site hosted the Presidential Debates, and several hopefuls announced their candidacy via the social media video uploading service. Soon, a kid became a YouTube star singing and playing the guitar. That kid was Justin Bieber. Thereafter, YouTube became the go-to for tutorials on how to knit, crochet, buy a car, make pasta, sew, decorate, and garden. YouTube made $19.8 billion in 2020, and has 38 million channels of which 22,000 have a million or more subscribers. The platform has turned everyday people into household names, millionaires. Like Mr. Beast who is the highest ranked YouTuber and earns $54 million a year. Or 7-year-old Russian immigrant Nastya who has almost 90 million subscribers and bags $28 million a year. How about the most popular YouTuber in African? That would be Oum Walid, who has 9.18 subscribers and is worth $3 million. A YouTube channel vlogger who regularly uploads content has the possibility to become a multimillionaire and be featured in Forbes. The name of the game is to establish a channel, create competitive content to draw in an audience, and keep the audience entertained and happy, which translates to subscribers, who turn into videos that are monetized. From there, anything is possible.

But with millions of channels and subscribers comes the legal headaches. While the Cardi B. / Tasha K lawsuit is the ﬁrst of its kind involving a well-known celebrity and a YouTube vlogger, channel owners in recent years have discovered the necessity of keeping a lawyer on retainer. The reason some ﬁnd themselves in legal hot water is because their banter treads and occasionally blurs the lines between facts and commentary. Take for instance the recently settled defamation lawsuit against Katie Joy Paulson and her “Without a Crystal Ball” channel. YouTubers and social media influencers Tati and James Westbrook sued Paulson in 2020 for defamation of character stemming from YouTube videos that were gossip in the guise of fact. Westbrook argued that Paulson’s videos sought to “ruin her reputation” and business. Paulson is currently being sued by Todd Chrisley, from the E! reality series “Chrisley Knows Best,” for … you guessed it, defamation. YouTuber Trena Sharrell Lloyd of “Sharrell’s World” also has been sued for defamation. One case was dismissed, the other with a plaintiff from the TLC series “90 Day Fiance,” Jenny Slatten, is still pending.

As long as there has been a Hollywood, there have been gossip columnists. People want to know the inner goings on of their favorite celebrity, singer or movie star. There is an entire industry dedicated to celebrity gossip with magazines, books, television shows and podcasts. It is understood and goes without saying that much of what one reads in gossip columns and magazines is ﬁction. Sometimes that piece of ﬁction is fed to gossip columnists by publicists or so-called sources. But these same periodicals can be held liable for publishing ﬁction as a fact. YouTube is a slightly different landscape. With 38 million channels and 2 billion users, the likelihood of YouTube successfully moderating each individual channel is a fantasy. Channels are not monitored directly by YouTube or its parent company, Google. Content is uploaded to the service at the discretion of the owner. If there is content that violates the guidelines, and it is reported, YouTube will demonetize it, meaning the video will not make any revenue or the channel can be taken down. YouTube says that it prohibits material of “explicit content, videos of animal abuse, shock videos, hate speech, and predatory behavior…and doesn’t allow content that targets an individual with prolonged or malicious insults.” Obviously, that is not true because Tasha K’s channel reached a million subscribers during the ﬁrst week of the trial and none of the 38 videos that slandered Cardi B. were removed by YouTube. Tasha K’s videos on Cardi B. were “prolonged or malicious insults” and should be considered an act of “predatory behavior,” given that when Cardi B. requested that Tasha K remove the videos from her channel, Tasha K. responded, “I’m not taking down s— unless you pay me.”

What happens next? Cardi B.’s court victory opens the door for celebrities, corporations and other entities to pursue legal action against YouTube channels that they believe are guilty of defaming or just flat out lying on them. Where YouTube once enjoyed a terrain that basically was untamed, in a “make the rules as we go along” kind of cybersphere, Tasha K’s libel judgment ushers in a signiﬁcant moment in its history. Tasha K is being hit where it most counts: the wallet. She is on the hook for $1.25 million and $250,000 for medical fees. The sum could go higher when the punitive damages portion of the case goes before Judge William M. Ray this week. Tasha K could see all that she has built evaporate. This includes the potential loss of her channels. But one thing is for sure: YouTubers across the board will feel a semblance of hesitancy and self-censorship never experienced before. Opinions and commentary will be acknowledged as such, and faux journalism gone rogue will pretty much cease. The executives at Google have not revealed any plan of action against Tasha K as of yet, so “Unwine With Tasha K” is scheduled to pick right up where she left off. Well, not exactly. Because of Cardi B., Tasha K. will be about $1 million dollars lighter.