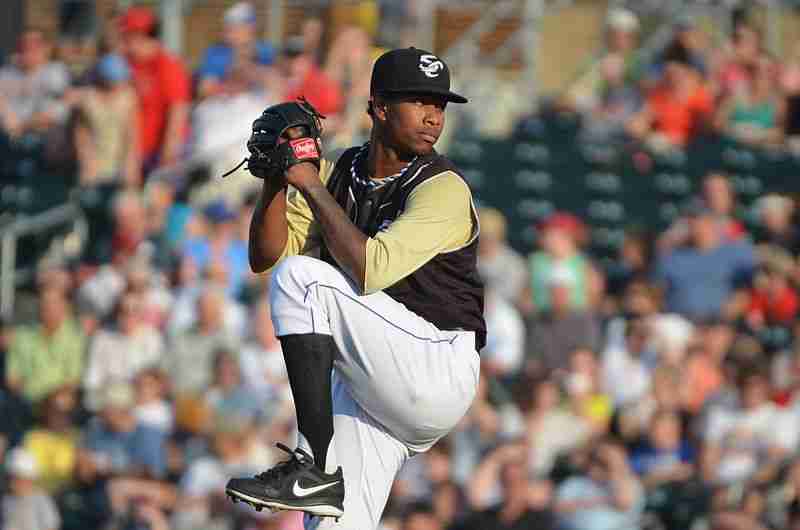 LAS TERRENAS, Dominican Republic – Dozens of children wearing blue T-shirts with the name “Ventura” emblazoned on the back gathered around a coastal home on Monday to pay their respects to their idol: Kansas City Royals pitcher Yordano Ventura.

He died Sunday in a car crash in his native Dominican Republic, where he was known for practicing with his former youth baseball team every time he visited the Caribbean country, said Silvano Santos, who coached Ventura from age 7 to 14.

The children talked quietly among themselves as they sat in the patio of the house Ventura bought after signing with the Royals. Inside, friends, family and admirers gathered around his coffin and tried to consoler Ventura’s mother.

“This is very painful for me because he was such a great baseball player,” said Yonfer Ventura, an 11-year-old member of the youth team.

Ventura was born in the town of Samana on June 3, 1991, and quit school at 14. He was working on a construction crew to support his family when he heard about a baseball tryout, which led to a spot in the local Royals’ academy. The right-handed wound up pitching his entire career for the Royals, going 38-31 with a 3.89 ERA.

The mayor of the Dominican town of Las Terrenas declared a two-day mourning period for the 25-year-old player, who died on a highway about 40 miles (70 kilometers) northwest of the capital of Santo Domingo.

Authorities have not determined what caused the accident but suspect speeding. Ventura was driving by himself in a vehicle he had imported from Florida last October after making some modifications to it.

Angela Martinez, mother to Ventura’s only daughter, said the player wasn’t known for speeding because he was affected by the 2014 death of his friend, former St. Louis Cardinal outfielder Oscar Taveras, who crashed at 22 in his hometown of Puerto Plata.

The Dominican Republic has the highest traffic-related death rate in the Western Hemisphere with nearly 30 deaths per 100,000 people. Four current or former major league players have died in traffic accidents here in recent years, including Andy Marte, a 33-year-old infielder who also was killed Sunday. He had played in the Major Leagues from 2005-2010 with Atlanta and Cleveland and returned in 2014 with Arizona.