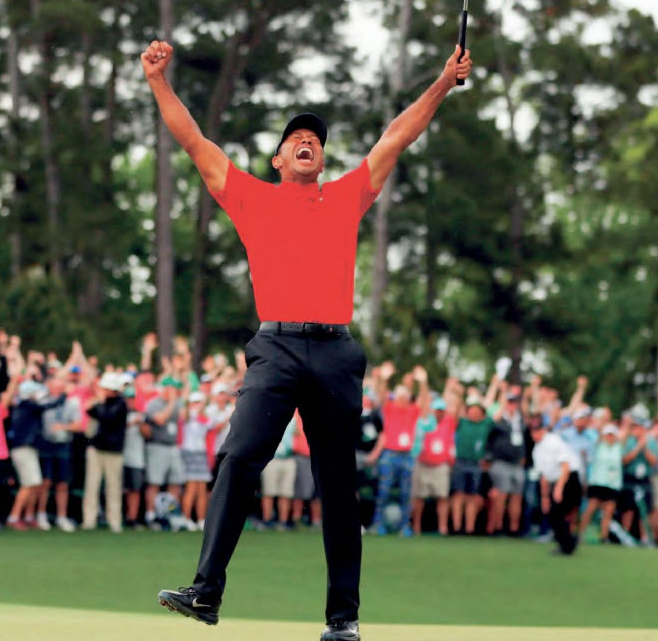 AUGUSTA, Ga. – Tiger Woods blazing to victory in his Sunday red at the Masters, a scene once so familiar, was never more stunning.

It was only two years ago at Augusta National that Woods needed a nerve block just to hobble upstairs to the Champions’ Dinner, unsure he would ever play another round of golf. He had a fourth back surgery with hopes of simply playing with his two children, not chasing Jack Nicklaus in history.

And now it’s all pieced back together – his life, his back, even golf.

A fallen hero, a crippled star, Woods is a Masters champion again.

He won his fifth green jacket, his 15th major, but never with this much raw emotion. The most ferocious fist pump was when he walked off the 18th green, scooped up 10-year-old son Charlie , embraced his mother and 11year-old daughter Sam.

“For them to see what it’s like to have their dad win a major championship, I hope that’s something they will never forget,” Woods said.

Who can ever forget this day?
A timeline of memorable events in Tiger Woods’ career: August 1996 – Wins third straight U.S. Amateur and turns professional the following week.

April 2001 – Completes the “Tiger Slam,” winning the Masters to become the only player to hold all four professional majors at the same time.

June 2007 – Nordegren gives birth to their first child, daughter Samantha, a day after Woods finishes runner-up in the U.S. Open.

June 2008 – Wins the U.S. Open in a playoff at Torrey Pines for his 14th major, four short of the record held by Jack Nicklaus. A week later, he has reconstructive surgery on his left knee to repair a torn ACL and two stress fractures in his left tibia.

He is out for eight months.

August 2009 – Loses a two-shot lead in the final round of the PGA Championship to Y.E. Yang, the first time Woods has lost a 54-hole lead in a major.

November 2009 – Crashes his SUV into a tree and a fire hydrant outside his Windemere, Florida home. Within a few weeks, his personal life unravels with reports of multiple extramarital affairs and he loses major sponsorship endorsements. He spends 45 days in a clinic and does not return to golf until the 2010 Masters.

March 2012 – Wins the Arnold Palmer Invitational for his first PGA Tour victory since the scandal in his personal life.

April 2014 – Has back surgery a week before the Masters and misses Augusta National for the first time.

August 2014 – Misses the cut in the PGA Championship and says he will take the rest of the year off, including the Ryder Cup, to get healthy.

February 2015 – Looking like an amateur with his short game, shoots 82 in the Phoenix Open to miss the cut. A week later at Torrey Pines, withdraws after 11 holes. Announces he is taking time off to work on his game, saying that “my play, and scores, are not acceptable for tournament golf.” April 2015 – Returns at the Masters, his chipping issues gone, and ties for 17th.

June 2015 – Shoots an 85 in the third round of the Memorial, his highest score as a professional.

August 2015 – Misses the cut in his third straight major at the PGA Championship.

December 2015 – In a somber press conference at his Hero World Challenge, Woods says of his future, “So where is the light at the end of the tunnel? I don’t know.” He says he wants to play again and anything else he achieves will be “gravy.” January 2017 – Makes first PGA Tour start since 2015 and misses the cut at Torrey Pines.

April 2017 – Has a fourth back surgery, this one to fuse his lower back.

May 2017 – Arrested and briefly jailed in Jupiter, Florida, on suspicion of DUI. Police find him asleep behind the wheel of his car in the early morning with the engine running. He attributes it to a bad combination of pain medication.

October 2017 – Woods pleads guilty to reckless driving and agrees to enter a diversion program. Prosecutors drop the DUI charge under the plea agreement.

December 2017 – Returns to competition at his Hero World Challenge, posts three rounds in the 60s and ties for ninth against an 18-man field, 10 shots behind.

July 2018 – Takes the lead in the final round of the British Open, only to make double bogey on the 12th hole and finish in a tie for sixth.

August 2018 – Closes with a 64, his lowest final round ever in a major, and is runner-up to Brooks Koepka in the PGA Championship.

September 2018 – Wins the Tour Championship for his 80th career victory on the PGA Tour, leaving him two shy of the record held by Sam Snead.

April 2019 – Wins the Masters for his fifth green jacket and 15th major title, his first in 11 years. He moves within three victories of Jack Nicklaus’ record for major championships.