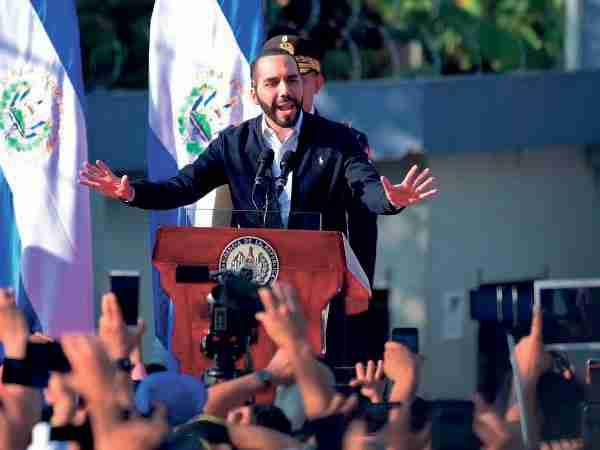 San Salvador, El Salvador (AP) — The most popular leader in Latin America is a slender, casually dressed millennial with an easy manner on Twitter and a harsh approach that critics call increasingly frightening.

As his ﬁrst year in power comes to a close, El Salvador President Nayib Bukele is ﬁghting both the coronavirus and the country’s powerful street gangs with tactics that some say are putting the young democracy at risk.

Bukele’s tough policies have been praised for driving down crime dramatically. The government reported 65 homicides in March, an average of 2.1 a day in a country that once saw more than 20 daily slayings.

Last weekend, however, there were 60 killings — a surge in violence allegedly directed from gangs in prison. His government reacted by releasing photos of hundreds of imprisoned gang members stripped virtually naked and stacked against each other as punishment.

“The gangsters that committed those killings, we’re going to make them regret it for the rest of their lives,” Bukele, 38, tweeted Monday.

Along with the humiliating photos, he said he had authorized the use of lethal force against gangs and ordered that their members be put in the same prison cells, creating the potential for more bloodshed.

When the coronavirus appeared, Bukele closed the borders and airports and imposed a mandatory home quarantine for all except those working in the government, hospitals, pharmacies or other designated businesses. People were allowed out only to buy groceries. Violators were detained, with more than 2,000 being held for 30-day stints.

The Supreme Court ruled these detentions unconstitutional without the legislative assembly passing a law establishing due process.

Bukele has ignored the court. The judges’ most recent decision revealed their exasperation, saying court decisions “are not petitions, requests nor mere opinions subject to interpretation or discretionary assessment by the authorities they are addressed to, but rather orders that are obligatory and must be carried out immediately.”

Bukele seemed especially displeased by an April 17 TV report in the city of La Libertad, which showed people on crowded buses and walking with groceries despite the quarantine. Except for the face masks, it could have been a normal day.

In a series of tweets, Bukele condemned the action and ordered a 48hour cordon on the city of more than 36,000. By evening, police and soldiers had locked it down, with all businesses closed. Military vehicles with machine guns blocked the city’s entrances.

“If that behavior continues, it is practically assured that the virus will spread and more than one of your relatives is going to die,” he scolded via Twitter. Bukele said he hoped he would not have to take similar action elsewhere.

“Not being able to go out to buy food is not a good situation for people,” he wrote on Facebook. “But if they don’t want to save themselves from death, we’ll have to save them.”

Last week, the attorney general said his ofﬁce was investigating whether the cordon was unconstitutional.

A poll this month by CID Gallup found 97% of Salvadorans approve of Bukele’s handling of the pandemic, giving him little incentive to back down. The ﬁrm surveyed 1,200 people April 13-19, and the poll has a margin of error of plus or minus three percentage points.

Figures from Johns Hopkins University said 345 people have been infected and eight have died in the country of 6.7 million, based on government reports.

U.S. President Donald Trump called Bukele on Friday to afﬁrm his support for El Salvador, noting it had assisted in controlling illegal immigration and saying the U.S. would help it get breathing machines.

“Bukele, ever since he came into ofﬁce, frankly has been enormously popular; he’s a tremendously effective communicator,” said Geoff Thale, president of the Washington Ofﬁce on Latin America. “The president has over time, in part buoyed by his popularity, increasingly tried to concentrate authority in his own hands and to ignore the separation of powers and the appropriate roles of other constitutional bodies.”

A former San Salvador mayor, Bukele was elected in 2019, easily defeating candidates from the two dominant parties, which had alternated in power for the three decades since the end of El Salvador’s devastating civil war. Corruption characterized those administrations and left a vacuum in which street gangs grew in power.

Bukele had come from the leftist Farabundo Marti National Liberation Front party but was expelled for constantly criticizing its leaders.

His victory left the FMLN and conservative Arena parties directionless and incapable of mounting strong opposition. His apparent lack of ideology beyond a personal brand of populism has infuriated both the left and right.

His only obstacles have been the legislative assembly, where his coalition holds few seats, and the Supreme Court.

In February, Bukele sent soldiers into the legislative assembly because it balked at approving a security funding-related measure. He withdrew them only after he said God had asked him to be patient. Local and legislative elections are scheduled for next year, and there is concern his supporters could take control of the legislature.

Bukele has repeatedly ignored the orders of the five-member Constitutional chamber of the Supreme Court to stop detaining people found breaking quarantine. He not only rejects the constitutional arguments, but accuses the judges of trying to kill fellow citizens.

“Five people are not going to decide the death of hundreds of thousands of Salvadorans,” Bukele tweeted. “No matter the ink and seals they have.”

Human Rights Watch Americas director José Miguel Vivanco tweeted Monday that with the authorization of lethal force against the gangs “Bukele is trying to give carte blanche to members of public forces to kill.”

There is a growing clamor for the international community, in particular the Organization of American States, to break its silence. U.N. High Commissioner for Human Rights Michelle Bachelet urged authorities to investigate all alleged human rights violations and to immediately release those detained arbitrarily.

Bukele’s office did not respond to requests for comment.

Next post Cheryl A. Wall, literary scholar dies at age 71