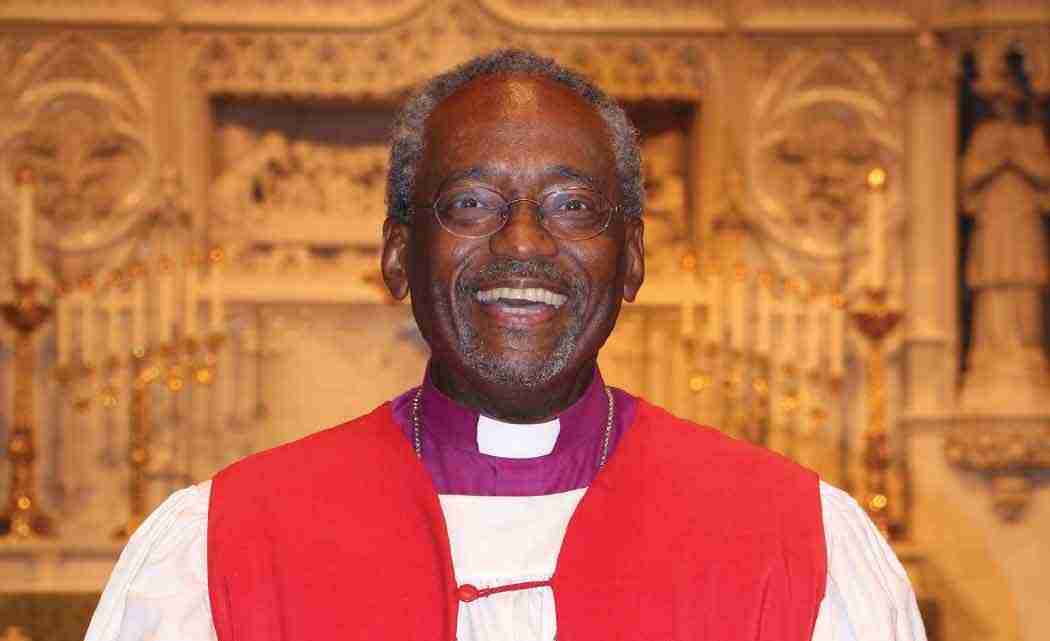 NEW YORK   —  The Episcopal Church, whose history is entwined with the founding of the United States, installed its first black national leader last weekend.

Presiding Bishop-elect Michael Curry, who comes to the job after nearly 15 years leading the Diocese of North Carolina, was elected last summer to succeed Presiding Bishop Katharine Jefferts Schori, the first woman leader of the church. Her nine-year term ended Sunday, when Curry formally stepped in, during a ceremony at the Washington National Cathedral.

Curry takes leadership of the New York-based denomination after years of membership losses and amid ongoing tensions among fellow Anglicans over Episcopal support for gay rights and same-sex marriage. His installation also comes at a time of renewed national attention to racism, after the shooting death of Michael Brown in Ferguson, Missouri, and the massacre of nine black congregants at a Charleston, South Carolina, church.

Curry, 62, who has two daughters with his wife Sharon, recently spoke with The Associated Press about religion, social change and his hopes for the nearly 1.9 million Episcopalians.

PATH TO THE PRIESTHOOD

Curry was born in Chicago and raised in Buffalo, N.Y., where his father, the late Rev. Kenneth Curry, was rector of an important African-American parish, St. Philip’s Episcopal Church.

Curry’s mother, Dorothy, died when he was in junior high school, so his grandmother, who he described as a “rock-ribbed Baptist,” helped raise him. He said her spirituality profoundly shaped him, and made for lively religious discussion between her and his father. He also saw an example in his father’s activism, including his help organizing a boycott to desegregate Buffalo schools.

As an undergraduate in the 1970s at Hobart College in Geneva, N.Y., Curry planned to become a lawyer and eventually run for public office until he was overcome by a calling to the Episcopal priesthood.

His father cautioned him that the ministry would not be an easy life, but Curry felt as a religious leader, he could help bring about deeper, longer-lasting social change. He went on to earn a master’s degree from Yale Divinity School, and then serve parishes in North Carolina, Ohio, and Maryland, before he was elected bishop of North Carolina in 2000.

The first, Verna Dozier, was a high school English teacher who became a highly sought after lay religious educator and speaker in the church starting in the 1950s. Her talks were collected in the book The Dream of God.

“She taught Episcopalians to read the Bible,” Curry said.

The second is Dietrich Bonhoeffer, the German Lutheran pastor and author of The Cost of Discipleship, who resisted the Nazis, helped rescue Jews and was executed in a concentration camp.

“His was a real following of the way of Jesus that was willing to love when others would hate and speak when others would be silent – and it seems to me that is the nature of following Jesus,” Curry said. “This isn’t a syrupy love, this is a tough love.”

Curry takes charge at a time when fewer Americans are formally affiliating with a religious group, contributing to diminishing membership in the Episcopal Church and other liberal Protestant groups, as well as in some conservative denominations, such as the Southern Baptist Convention.

Membership in the Episcopal Church has dropped by 18 percent over the last decade alone.

Curry hopes to help “raise our visibility in positive and genuine ways” and persuade Episcopalians to “take evangelism seriously,” including inviting newcomers to church.

About 23 percent of Americans now say they have no religious affiliation, according to the Pew Research Center. Still, Curry said a great “spiritual hunger” persists in the U.S., that can lead more people to the Episcopal Church.

“A relationship with a living and loving God – that need has not gone away,” Curry said.

The Episcopal Church, the faith home of many Founding Fathers and U.S. presidents, has been trying to confront its own history of racism. Many Episcopalians, including George Washington, were slaveholders whose donations were used to build churches, cathedrals and schools.

In 2008, Jefferts Schori held a national service of repentance to apologize for the church’s complicity with slavery, segregation and racism. Some dioceses have been researching their links to slavery. The Diocese of Rhode Island is planning to turn its cathedral into a museum on the North’s role in the slave trade and a center for racial reconciliation.

As presiding bishop, Curry said he will encourage that examination of  “where we have been timid or silent and where we have been faithful,” and “to be honest about that history and engage it, and learn from that how we move to a new future.”

“The cries of Ferguson and Charleston, the cries of our prison industrial complex, the cries – and this is beyond just only racial – the cries of the poor who are finding no ways out of that poverty –that is a cry to the churches and to people of faith and this country,” he said.

Next post Serve appetizers for tasty and creative entertaining

Previous post The First Lady’s Trip to Qatar and Jordan: