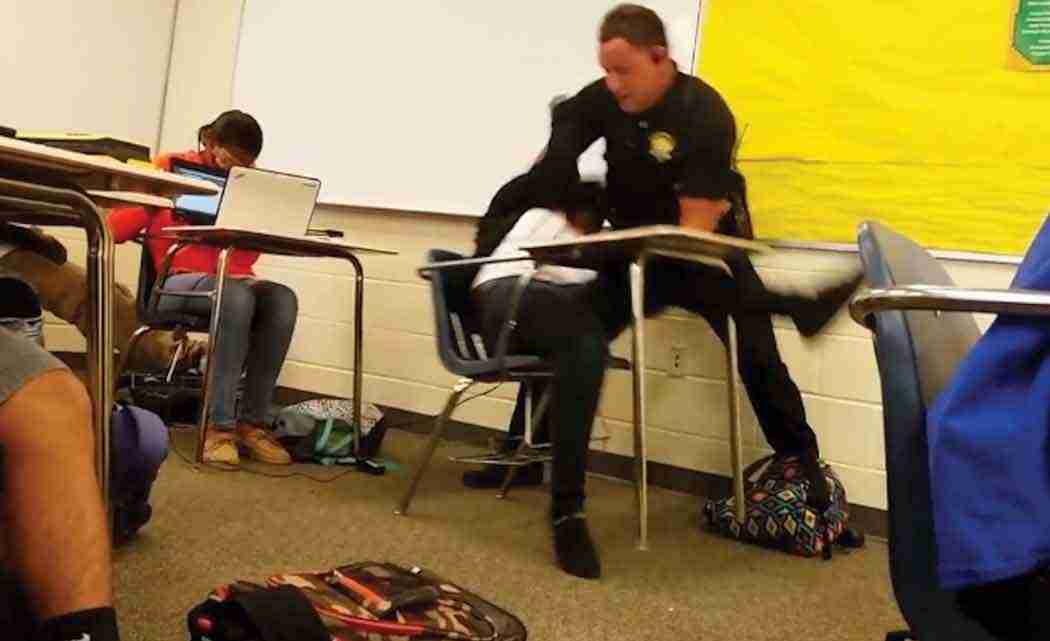 COLUMBIA, S.C. — The Justice Department opened a civil rights probe Tuesday into the arrest of a student who refused to leave her high school math class, where a deputy was recorded flipping the girl backward in her desk and tossing her across the classroom floor.

The sheriff’s department said no one was hurt, but the confrontation prompted outrage after several students recorded part of it and shared the video. One student said it started when the girl pulled out her cellphone and refused her math teacher’s request to hand it over during class.

During the moments posted online, Fields can be seen standing over the girl, telling her to stand up or be forcibly removed. When she refuses, the officer wraps a forearm around her neck, flips her and the desk backward onto the floor, and then tosses her toward the front of the classroom, where he handcuffs her.

A second student verbally objected to the girl’s treatment and also was arrested.

Both girls were charged with disturbing schools and released to their parents. Their names were not released, but the second student, Niya Kenny, told WLTX-TV that she was shocked by the use of force and felt she had to say something. Doris Kenny said she’s proud her daughter was “brave enough to speak out against what was going on.”

Lt. Curtis Wilson confirmed that Fields is white and the students involved are black, but told The Associated Press in an email to “keep in mind this is not a race issue.”

The district’s Black Parents Association denied this, saying the video “revealed what many African-American parents have experienced in this district for a very long time.”

Tony Robinson Jr., who recorded the final moments, said it all began when the teacher tried to confiscate a phone the girl took out during class. She refused, so he called an administrator, who summoned the officer.

“The administrator tried to get her to move and pleaded with her to get out of her seat,” Robinson told WLTX. “She said she really hadn’t done anything wrong. She said she took her phone out, but it was only for a quick second, you know, please, she was begging, apologetic on what happened and everything.”

“Next, the administrator called Deputy Fields in … he asked, ‘will you move,’ and she said ‘no, I haven’t done anything wrong,’ Robinson said.

“When I saw what was going to happen, my immediate first thing to think was, let me get this on camera. This was going to be something … that everyone else needs to see, something that we can’t just let this pass by. That was wrong, and there’s no justifiable reason for him as to why he did that to that girl,” he said.

Districts across the county began placing officers in schools after two teenagers massacred their fellow students at Columbine High School in Colorado in 1999. Experts say lines have blurred since then, as administrators summon in-house police officers to implement routine discipline.

Police are “trained to fight criminals,” said John Whitehead, founder of the Rutherford Institute, a nonprofit civil liberties and human rights organization. “Kids are not criminals, by the way. When they won’t get up, when they won’t put up the phone, they’re silly, disobedient kids – not criminals.”

Police officers should be posted at entrances to “stop the crazies from getting in these schools,” Whitehead added. “When you have police in the schools, you’re going to run into this – having police do what teachers and parents should do.”

The Rev. Jesse Jackson called the video a “national disgrace” on his way Tuesday to Columbia, where the NAACP planned a news conference. “This man should be arrested, charged, fired and sued,” Jackson said. “The department should be sued.”

Columbia Mayor Steve Benjamin also called for an independent investigation. School Superintendent Debbie Hamm said “the district will not tolerate any actions that jeopardize the safety of our students.” School Board Chairman Jim Manning said “there is no doubt that the video is extremely disturbing. The amount of force used on a female student by a male officer appears to me to be excessive and unnecessary.”

It was an “egregious use of force,” ACLU of South Carolina Executive Director Victoria Middleton said.

Fields has prevailed in court against accusations of excessive force and racial bias.

Trial is set for January in the case of an expelled student who claims Fields targeted blacks and falsely accused him of being a gang member in 2013. In another case, a federal jury sided with Fields after a black couple accused him of excessive force and battery during a noise complaint arrest in 2005. A third lawsuit, dismissed in 2009, involved a woman who accused him of battery and violating her rights during a 2006 arrest.