Financial justice was a key focus at 2016 NAACP convention 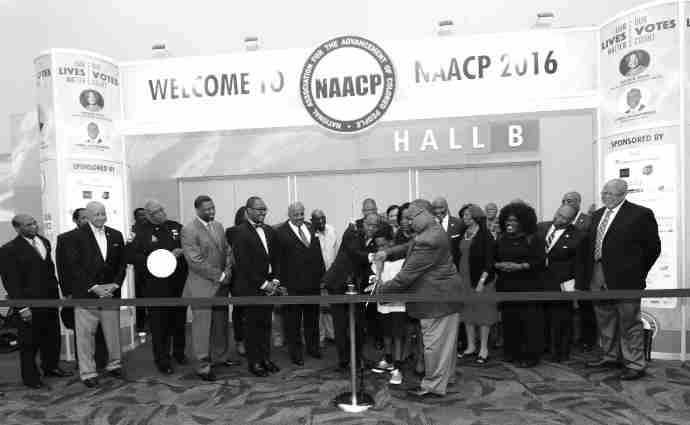 With 2,200 branches in every state, and added presence on 60 military installations – five located overseas – the NAACP’s grassroots reach is unparalleled.

And throughout its 107 year history, the annual NAACP conference has addressed issues that affect people of color. From the Niagara Movement, to Jim Crow, and discriminatory education, employment and more, the NAACP still stands as this nation’s largest and oldest racial justice advocacy organization.

In 2016 another issue – just as pressing as those for which the NAACP is             historically known – echoed throughout the convention by several speakers and resolutions: financial justice.

“Vote to stop the payday lenders and the car title lenders that come in like vultures and prey on our communities,” said Ohio Senator Sherrod Brown, the Ranking Member of the U.S. Senate’s Committee on Banking, Housing, and Urban Affairs, on July 18 in the host city of Cincinnati.

Similar remarks on financial justice were also offered during a legislative session by Houston Congressman Al Green, a former NAACP branch president, and Oregon Senator Jeff Merkley, a marcher in last year’ America’s             Journey for Justice, sponsored by the NAACP.

Noting how payday loans are heavily marketed in communities of color, and its hopes for regulation that would require loans be affordable, the resolution tied major banking institutions to the predatory, small dollar loan. In part it reads, “The NAACP recognizes the significant enabling/collaborative role of the major banking institutions in providing payday and other predatory lenders favorable financing.”

Other sections of the resolution stated how high-cost, small-dollar loans are designed to last months, if not years, forcing borrowers into repeated refinancing and high default rates. Making these loans affordable, in the NAACP’s view, should require lenders to take into account borrowers’ incomes and expenses.

A number of studies have found that each year payday and car-title loans strip more than $7 billion – largely from people of color and other low-income consumers. According to consumer advocates, these loans are the most predatory and further, exploit those with the fewest financial resources.

Financial justice remained the convention focus with a keynote address from Richard Cordray, Director of the Consumer Financial Protection Bureau (CFPB). Created as a cornerstone of the Dodd-Frank Wall Street Reform Act, CFPB has in five years enacted financial regulations and returned $3.48 billion in restitution to consumers who were harmed by unfair financial practices.

“[F]or African-American communities in this country, credit is often unavailable, may be quite expensive, or is offered through predatory practices,” noted Cordray. “For too many consumers of color, the pursuit of prosperity can be difficult or even ruinous. Active discrimination, fueled by conscious or unconscious prejudice, has hindered millions of African-American consumers from getting ahead, or even keeping up.”

“These economic injustices deny opportunity, drain wealth, and desecrate communities,” added Cordray. “We have committed ourselves to pursue fairness and equal justice in the financial marketplace, and we will continue to bring that same commitment to every single community throughout this country.”

“We will seek to attain the same dignity and respect for every one of us that each one of us deserves. Because that is what America must be about – making every consumer count,” he concluded.

For Diane Standaert, a convention delegate and executive vice president with the Center for Responsible Lending, the resolution and speaker remarks on economic injustice provided a boost to ongoing efforts to engage communities directly impacted by predatory lending.

“We are grateful that the NAACP’s foot soldiers are actively joined with its leaders and others in the fight for an end to predatory lending,” said Standaert. “Everyone – whether with families and neighborhoods or on social media – will generate a drumbeat for justice that includes financial fairness for all.”

According to Roslyn Brock, NAACP Chairman, the organization is ready and able to carry on. “There is something on the inside that is resilient in the lives of people of color who somehow, despite the odds, manage to take one more step, fight one more battle, and cast one more vote to affect the outcome. We may get knocked down, but we won’t be knocked out!”