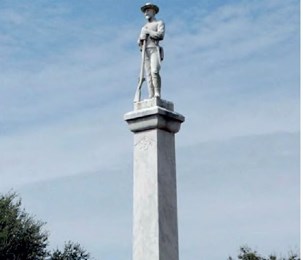 LAKELAND, Fla. (AP) – A statue of a Confederate soldier is being removed from a Florida park.

The statue had stood at the center of Lakeland’s Munn Park for 109 years. City officials began dismantling the monument Friday.

City commissioners voted in December 2017 to start the process to move the statue after receiving complaints from residents. In November, commissioners approved funding the $150,000 cost of moving the statue with citations issued as part of the city’s redlight camera program.

The Ledger reports the statue is being relocated to a different park where the city honors soldiers and first responders. Veterans Park is adjacent to a city-owned convention and entertainment complex.

The director of the city’s parks and recreation department, Bob Donahay, says dismantling the monument and relocating it will take several days.