Haiti in the crosshairs 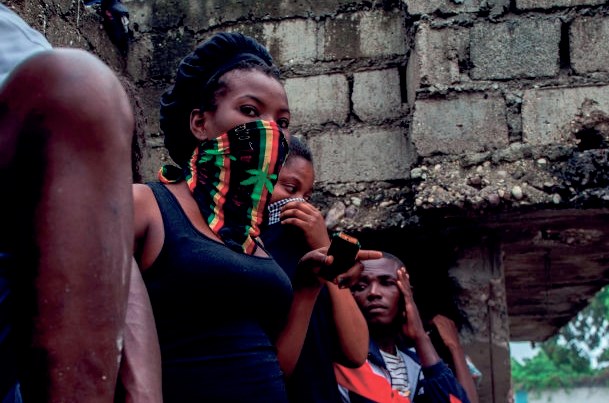 WEST PALM BEACH, Fla. – There is a resounding sound reverberating throughout the world regarding the island nation of Haiti. That is, how much more can the country take? Across the globe, hearts bleed for the Caribbean nation as they grapple with the aftermath of a devastating 7.2 magnitude earthquake that shook the region Saturday, Aug. 14. And to compound the devastation, tropical storm Grace pounded the island days later, leaving the potential for mudslides and more chaos, further complicating efforts to find possible survivors of the penetrating earthquake.

The horrific numbers keep climbing. Over 2,000 are dead thus far and over 10,000 are injured. Many are un- accounted for and hordes of homes are demolished. It’s already a worse case scenario but stands to become even more dire in the days, weeks, and months to come. It could even be years before any signs of normalcy resurface in a country already challenged.

Relief efforts are underway from around the globe, including South Florida, which is home to scores of Haitian Americans. While earthquake relief is needed and welcomed, some South Florida Haitians say the earthquake of 2010, the civil unrest in the island nation, the recent assassination of the country’s President and now another natural disaster, puts the spotlight on their country in more ways than imagined.

Many are saddened by the negative occurrences, but some say it’s time to take a closer look at Haiti, its rich history, and the bigger picture of what the island country really needs.

Palm Beach County Commissioner Mack Bernard, of Haitian descent, organized relief efforts ten years ago after that shattering earthquake and he also calls for support this time around. He says the country desperately needs the prayers of everyone. “I am heartbroken that another powerful earthquake has struck Haiti again. This follows a difficult summer which included the assassination of the late Haitian President Jovenel Moise on July 7th. The next couple of days and weeks will be difficult. I am asking you to keep the people of Haiti in your prayers,” he stated, indicating he will work with other officials to assist the island.

But world renowned artist, Harold Caudio, also of Haitian descent and a Palm Beach County resident, says things we take for granted here in the United States, they don’t have access to in Haiti, making relief efforts on the ground even more inefficient. “I think the most heartbreaking part is the lack of resources. Things that are in abundance here, are so scarce in Haiti, like even down to protocols for emergency response. It shouldn’t be that way,” said the conscientious artist, whose art form was catapulted into stardom after he crafted a portrait of Trayvon Martin using Skittles candy, which was the brand of candy the teen was carrying when gunned down in Sanford, Florida in 2012. “America would love to help, but how? We don’t even know who to trust! I’m entertaining the thought of maybe doing a charitable auction with my art to raise funds for Haiti,” he shared.

Corporate disc jockey, Beatrice Dorlouis, who has family in Haiti, points out the United States and Haiti have a complex relationship.

She believes the fact that Haiti is an island nation with over 11 million blacks and a rich history of gaining independence first – plays a significant role in how the country is viewed. Dorlouis believes other countries would rather keep the country dependent on them, rather than help the country to become truly sustainable. “It’s really heartbreaking because the people don’t have the resources or know what to do..,.especially in a natural disaster. It’s unfortunate. There’s an immediate need, yes. But there needs to be overall change,” she said.

Organizations all across South Florida are accepting donations and supplies to help the earthquake victims. Check your local media for ways you can help or visit: unitedwaymiami.org or call: 800-226-3320.